As Goths are the only group of people holding the oldest complete Bible, (by Bishop Ulfilas) we should look more towards this Scythian Tribe. As all history agrees these peoples came out of the same region where the lost 10 tribes disappeared. Thousands of great books have been published just on the Israel Identity aspect (the House of Israel race/tribes who were always separate and distinctly different from the House of Judah and especially the newer tribes claiming to come from Judah who really are Esau Rev 2:9 and 3:9.) However this topic is more about the Sabbath, the sign we are His people. 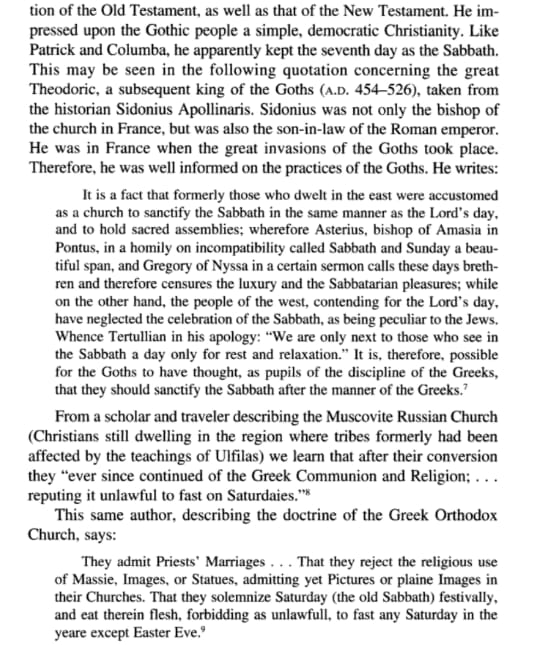 As we know Saint Andrew had converted the Goths early on. Even the regions of greater Scythia (ie where the Scots constitution says where they all had come from) they claim to had been converted by St Andrew by the Black Sea. This great Second Century author Tertullian did record it well, of their practices. “the Goths sanctify the Sabbath after the manner of the Greeks.” As was reiterated quoted in the days of King Theodoric of the Goths, and re-highlighted by the Sunday keepers that he conquered, ie Bishop Sedonius at France who personally witnessed the invasions of the Goths, and declared this same fact about the Sabbath keeping (on Saturdays) by the Goths. Regarding Bishop Ulfilas of the Goths, Page 140 “Truth Triumphant: The Church in the Wilderness”
By Benjamin George Wilkinson
More info on this topic in the book “Sabbath in the Orthodox Church” by Rev Dr Stephen MK Brunswick
You may also download a PDF Copy of the Book “Truth Triumphant”.
← Previous Post
Next Post →