The Gospel to Britain #1 (#2) It came about 37 A.D. From the book “Celt, Druid and Culdee” (1973) by Isabel Hill Elder To trace the history of the Culdees from the days of St. Columba is a comparatively easy task; to find their origin is more difficult. In the minute examination which such an […]

The Lost Disciples to Britain #3 The Glory in the Name Go back to Page 2 or Page 1   DRAMA OF THE LOST DISCIPLES by George Jowett (1961) THE GLORY IN THE NAME WHY THE NAME “BRITIAN” “BRITISH”? AFTER the Kimmerians had settled in the Isles of the West they were known to the […]

Succession of the Jersalem Bishops and Church.  A study from the Priory of Salem Institute of Theology Many people are unaware of how much authority Saint Joseph (Christ’s uncle, the doctor of the Sanhedrin) had. He was widely recognized as the most eligible heir to the throne and crown of King David. Many thought he […] 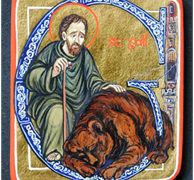