The “Ionized” Lipid Nano Particles, an electro nano-tech substance listed on all the ingredients. All .gov pages, all medical journals, all scientists agree.

Are the “Ionizable Lipid Nano particles” (conductive DNA splicing tech) in the C0v1d vaccines Not Toxic?

Read it from the Government websites, or from any one of the Medical Journals, or numerous general science websites. All agree. These unanimously conclude about the main covid vaccine ingredients being “ionizable lipid nanoparticles” i.e.: https://www.ncbi.nlm.nih.gov/pmc/articles/PMC8609914/.

In studies on the effects, this ingredient is clearly documented to attack every single cell in the human body, (with however supposedly “unknown” effects during the emergency rollout). The legal trick words used by the top Stock Shareholders of these vaccine manufacturing companies, like Pfizer and Moderna, are now disclosed to be the “Scientists” most relied on by corrupt government officials (hundreds of officials who are also shareholders of the vaccine companies posting record profits). Corruption (officials taking bribes, or profiting off of government contracts) is a crime. However they have special cover. As currently “diplomatic immunity” (exemption from criminal prosecution) was granted to the vaccine producers decades ago, and this holds true today. Injury compensation has to be claimed only at the US Federal Claims court, as also vaccine companies are exempt from lawsuits. Only when it affects you, or a class of people (like military, 100s of thousands of soldiers refusing to take it) there are court injunctions to block it.

The ingredients are confirmed on any government or medical website: 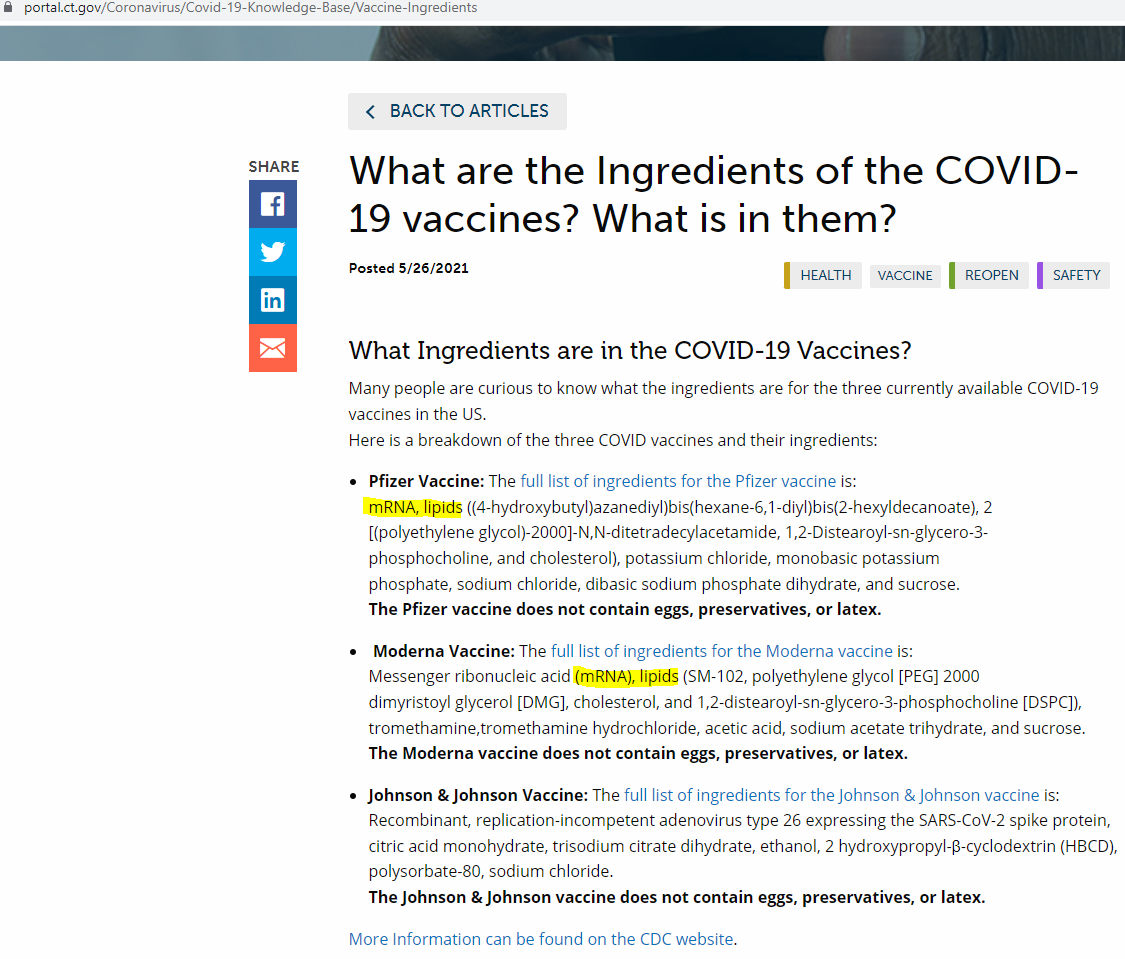 Consistent with past FDA approved medicines manufactured by Pfizer and Moderna, they have had numerous multi-billion dollar damage settlements over the years. This technology failed at all the safety related studies (especially the mouse studies), where 100% of the animals died with auto-immune disorders (unless terminating the study earlier, or not studying this aspect). The long term data of the full effects (the basic safety testing that has been forgone, rolled in parallel for an emergency rollout) will be collected for at least 7 years. Auto immune disorders shown in 100% of the animal studies, take a much longer time to play out in humans.

“Role of Ionizable Lipids in SARS-CoV-2 Vaccines As Revealed by Molecular Dynamics Simulations: From Membrane Structure to Interaction with mRNA Fragments”: https://www.ncbi.nlm.nih.gov/pmc/articles/PMC8609914/ 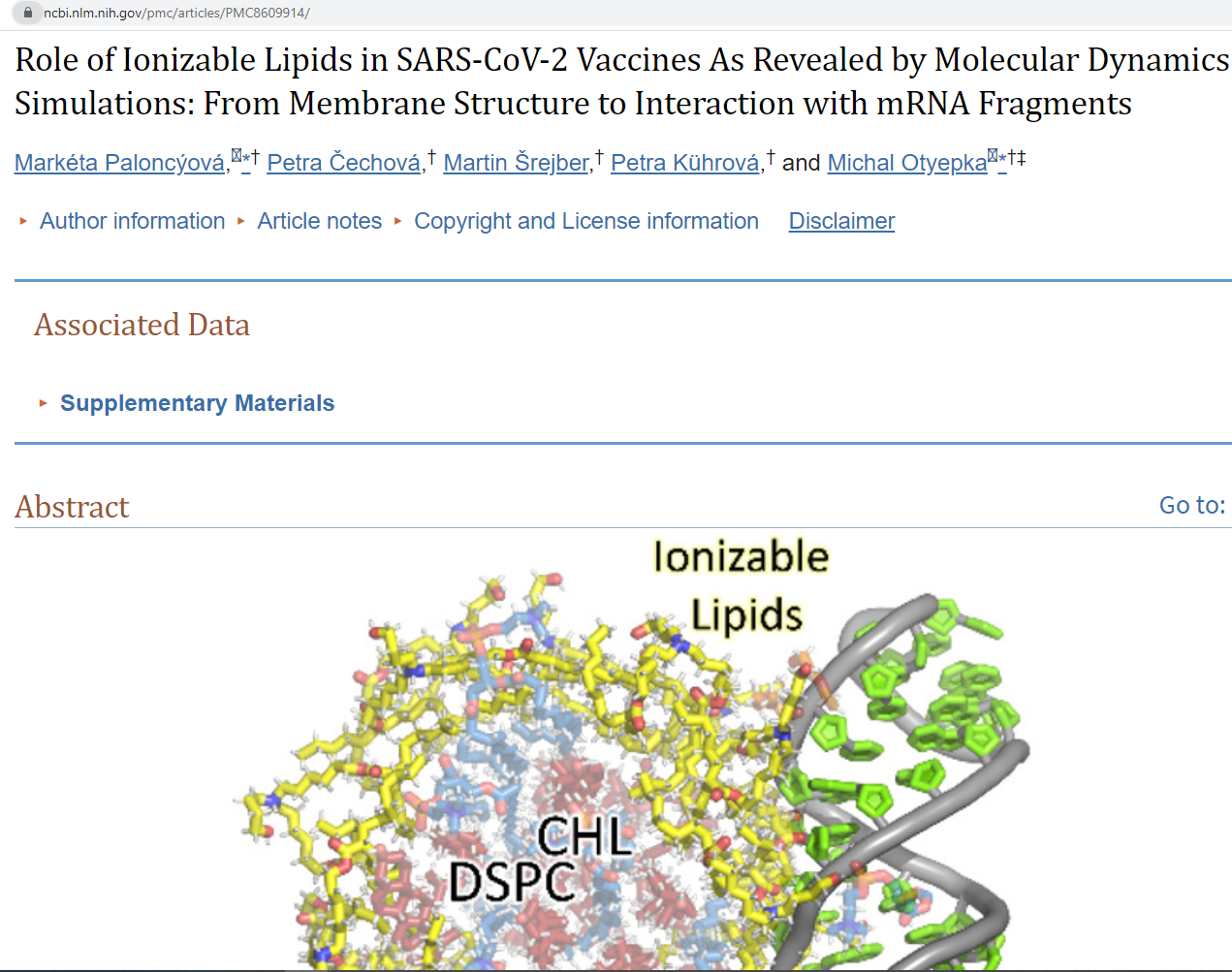 For more than 100 years doctors everywhere said “tobacco was safe and effective”. Various unhealthy mandates typically take longer to reverse. Our member’s only Institute of Health studies has documented several examples comparing how it took 50 years for “popular” toxins to be classified as unhealthy. For example cigarette data. It goes at a snails pace when there is money to be made, for example in new hip cultural things, like castrating boys before puberty (words of the US Health Secretary is it will be done robustly, and more early in life). What we do know is when there’s money to be made there will be a “robust rollout” for the US Senate/Congress shareholders of the vaccine producers making the mandates (textbook definition of corruption anywhere in the world).

So we may have to wait some time for this new so-called “healthy” experiment (DNA editing / 100% rate of auto immune dysfunction disorders) to work their ways through the courts. Vaccine producer Merck refused to make a c0vid vax, and said it straight out of the gate that auto-immune disorders would happen, so Merck put in their press release they will only work on suppressing the auto immune disorders guaranteed to happen from the planned injections of their competitors.

So in a climate where even using a very basic dictionary definition of gender can get you thrown in prison, and all your property taken away to compensate damages to a suicidal person, we advise our students to use this information for peace and diplomacy. It should never be construed to be legal or medical advice. Always consult with your doctor and attorney, and not to use this advice as-is. With that legal disclaimer out of the way. We can suffice it to say that everyone involved in the rollout will have died decades before the next round of accurate Nuremberg code violations for the state forced medical experiments. This data is for doctors to study, demonstrating why this new “warp speed”(Star Trek-Trump) mRNA technology has always been stopped at the animal trials. Here’s why.

We at Priory of Salem, Institute of Health studies were queried about which vaxxine (*that word gets us blocked*) ingredients would be most likely causing health problems, so that those involuntarily forced (as Ukraine war refugees) to get injected can check with their doctors.

After putting together this report, we decided to send it along to our “members only” community who may also wish to ask their Doctors if they are allergic or at risk to these ingredients, namely the certain kinds of “lipid nano particles” listed on the ingredients. Medical Journal Article 1 below (should be in his grasp of proficiency) as it lists most of all what they to explain and help you to voluntarily approve for injecting into your body. This is most especially an “informed consent” requirement while the updated versions of those main vaxxines are now only under “emergency” authorizations (as experimental / voluntary) rather than a standard license.

Have you been informed by your Doctor about the systemic inflammatory properties found in the main c0v1d vax ingredients put out by Pfizer and Moderna? Everyone is operating under the assumption of informed consent, the well published suspension of safety testing periods of 8 years (for catching the auto immune disorders or genetic defects caused in offspring etc), under an “emergency use” authorization where the recipient is 100% volunteering to the experiment never done on humans (not a single product that deployed mRna technology as a vax has ever been approved).

If you don’t have informed consent it’s an illegal coercion in violation of the Nuremberg code of medical experiments on populations. Also any advertising or promoting any unlicensed medical products (like 90% of the vaccines “under emergency use authorization only”) is absolutely illegal by laws in most modern countries. Also no person can assign medical treatment if they don’t have a medical license.

Promoting Unlicensed Vaccines is Lawbreaking (by Dr Malone, the inventor and pioneer of this vaccine technology, who has called for an immediate stop).

For these legal reasons we inform you that this is not medical advice. We will never illegally advertise for anyone to inject any non-licensed product (like 90% of the presently used vaxxines). *Email sensors block that word.* We advise to check with your Doctor (not us) to ask specifically about this well published “main ingredient”. The ingredients are posted on all manufacturers publications, at least as excipients. Specifically the lipid nano particles. They all have ones called a ionizable or Cationic Lipid Nano Particles. These are the ones that several medical journals are warning about. However, you can admit you’re not a doctor, so would like their expert advise about “ionizable lipid nano particles”. If anything is not clear, perhaps you can consult with your attorney to bring a note, where he will sign that it’s something that would not effect your health now, nor in the future. If he doesn’t know, admit you also don’t know the medical jargon, but here it sounds like it passes down defective immune responses down to multiple generations of your descendants. To help bridge the gap, and quicken this process along, you may wish to bring these two studies to your Doctor and ask if you’re in any of these 2 risk categories.

These are the up-to-date Scientific Medical Journal articles that show the Lipid Nano Particles used by Moderna and Pfizer continue to circulate in the bodily systems, and purport to cause strange inflammation and disease symptoms. Although they say it can pass down to the descendants of mice they stop short of saying humans, and demand that there is some actual human research. This actual research normally doesn’t go as “warp speed” (a word from Star Trek, adopted by Donald Trump, who retracted the program at the end of his Presidency), but would get at least enough years to determine if there will be any auto-immune diseases, as so many doctors conclusively proved occurred in mice. The rollout was allowed as these safety tests would be planned and then completed in parallel within the 7-10 years. Only “voluntary” human experiments can be done while it’s mainly on as “emergency use authorization”. It’s also not uncommon for these producers to be sued for their drugs once they got their FDA approvals. Each study highlights how the vaxxine is effective on obliterating the virus itself but implores the community to also perform safety tests sometime very soon. All admit, there’s no better destruction of the virus (and the cells of the body that exhibit virus-like traits). However, now we are seeing this may pass to the descendants, so it’s important to get it right.

We know that one of the biggest vaccine producers in the world (Merck) refused to make a vaccine, and said the human immune system is better. They instead opted to take the financing to produce drugs that would counteract an over active immune response (or auto immune disorder) to inhibit their competitors therapies from killing their patients.

Prayerfully here for our members who have any additional requests. Take care and God Bless,