In celebration of the 1,086 year anniversary of the crowning of our King and Emperor,  Otto I., the Great.

First a Foreword from our Primace (in Wolfenbuttel that title is “summus episcopus”) HMSH Rev Dr Stephen MK d’Guelph Brunswick:
We say “our King” as most likely you do descend from those who called him such and so you are of the tribe of the greatest freedom loving nation the world has seen, the German people. The largest ethnic group in America is still Anglo Saxon German. Much of England is also. No one disputes we have brought the Bible and Gospel of our Lord Jesus to more places than any other. The True Israel message is a deeper subject of which we have thousands of books.
So yes he was King of your ancestors and by name and title thereby King of your (our) tribal community that continues on in the earth with full distinctiveness. We have all a human right of freedom of association and much more for our “indigenous minority”.
The House of Wolfenbuttel-Brunswick are successors of the Ottonian house, and several other Imperial Dynastic bloodlines of which no other holds claim. 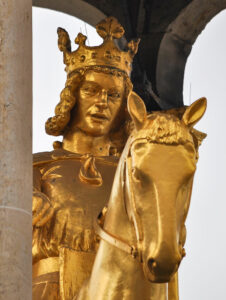 The Magdeburger Reiter, an equestrian monument traditionally regarded as a portrait of Otto I (Magdeburg, original c. 1240)

Emperor Otto was the eldest son of Emperor Henry the Fowler. He was father of Emperor Otto II (married) Byzantine Princess Theophanu, Empress & Regent of Otto III. All were Kings of Germany, Crowned Holy Roman Emperors.
Emperor Otto III was called the Wonder of the World, son of Emperor Otto II and Theophanu of Byzantium. Their successor of the same House of Witukind (last King of Saxony) Emperor branch, became Otto IV von Brunswick, also crowned as Emperor.
In the time of Witukind Charlemagne had turned our Black Horse to a White Horse (upon conversion to Christianity).
Hanover uses the red shield, we use the blue shield, as is from our capital principality of Wolfenbuttel.
We also use the Oelsnica shield and name officially in sovereignty usage per all prescriptive laws of sovereigns (former territory known as Piast Silesia, then renamed Lower Silesia) which as you may know borders Hungary and 3 other countries of importance. See map. You may have read about our house having the most known Piast blood also, great compilation includes Hungary titles. As you may know it was part of the older Bavarian Duchy of our house.
When our ancestor Otto IV von Braunschweig (capital principality of Saxony) was anointed Holy Roman Emperor (as those before him and after him were also) he did not pay attention so much to His Angevin Empire title given him by his uncle King Richard of England, as was with his Aquitaine France title, although he did keep the 2 lions on the red shield that stayed ever since a rival capetian house.
They did surrender to give us back what was ours several times. Also Naploeon III did, who was subsequently elected President of France. He gave us a treaty of mutual help between the nations (as a public treaty co-authored by the UK parliament) to help Brunswick regain it’s crown and as Emperor of all German states, to be supported in making a new modern constitution for Germany. 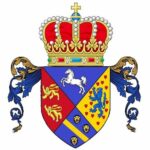 Foreword from Prof. Klaus Jaeger in Germany:
On August the Eight in 936 AD Otto, from the House of Saxony, was crowned King of the Germans in Aachen, Germany, capital of Emporer Charles the Great.

Otto founded the Holy christian Roman Empire, he was also King of Italy , and was honoured as saviour of European Christianity with the highest honour : Otto was crowned as Emperor of Europe (except Britain, of course.)Without this brave, merciful , wise and victorious German Emperor none of us would exist because the pagan barbarians from the North, the South and the Asian plains attacked Germany, France, Italy and other countries repeatedly in countless numbers.

This invasions of pagan hordes are prophesized in Revelation 12: where Satan spits “waters” (pagan people) after the “woman in the wilderness”, i.e. Gods nation in Europe.

Europe was rescued from being overrun by heathen hordes by the House of Saxon, i.e. Otto the mercyfull, his son Heinrich, the father of the fatherland, and his son Otto, the Great.

Sure, these christian kings and emperors did not fight alone, but with Franks, Thuringians, Bavarians, Saxons, Lombards, Lothringians, all great warriors,

but without these christian leaders , the House of Saxon, Europe would be destroyed and our fathers would not have been existed.

Study your roots, Whites in America ! Many of our fathers, a thousand years ago, gave their blood and life for the future of their children … us.

Maybe some christians in your circles are interest in this true history.
There is a great work about Emporer Otto I and his age:

https://archive.org/details/kaiserottodergro00vehsuoft
It is great history literature ; written long before the “Allied devils” attacked and overran Germany and Europe; meaning: not censored by these antichrist demons.
We now are in the time, acc. to Daniels prophecy and my  research, in the time of the feet of Nebuchadnedzars dream statue, composed of clay and “iron”;
a word study shows that this “clay” is dirty clay, mixed with demons.
It is worth to remember the times and brave deeds of our fathers and to see that Christs prophecy was fulfilled and will be fulfilled to the dot of an ‘i’.
Without Otto the Great and his family Europe would not have been existed because the pagan hordes would have killed, enslaved  or mongrelized our ancestors all.
Without Otto the Great and his German warriors also the USA would not exist, for the first settlers on the American continent were white christians from Europe, Britain, Germany.
← Article précédent
Article suivant →