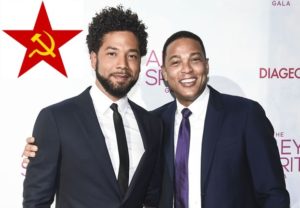 Chinese communist surrogates in the media.

Smollet, fake hate crime actor (left) and Lemon, the CNN propagandist promoting anti-American hate against what he calls the “systemic white supremacist nation”(right). All who conspire with outlawed communist (antifa) terrorist groups should be arrested and tried under the laws on the books. These same groups are in control of the cities with the voting fraud, see: https://orthodoxchurch.nl/2018/07/philadelphia-mayor-conspires-with-outlawed-communist-terrorist-groups/