Till the Immigration Act of 1965, the precedent remained that only Whites could become US Citizens. People born after Obama in Hawaii in the 1960’s have also been stripped of their US citizenship as recent as the 1990s. This is when we are a nation of laws rather than a nation of chaos.

In 1923 The US Supreme Court had decided those “not descended of Adam / White” could not become US Citizens. This included a verdict that those from India are not of the true Caucasian Aryan branch race. This Supreme Court case “US vs BHAGAT SINGH THIND” cited the 1790 law that only “free whites” can be citizens, and persuant to that law striped the Indian of his citizenship. This case set the precedent that all Sikhs inside of America are also stripped of their US Citizenship. Until  the 1965 Immigration Act all third world (non-white) immigration into America continued to banned and the requirements of naturalization and citizenship remained exclusive to Caucasians. Until 1968 most US states had laws against interracial marriage, and 28 states remained with laws that it’s a felony (5-10 years in prison sentence) for a Black to marry a White. This and other such Christian laws in America, such as the laws against sodomy, are touched on in the video by Dr Brunswick.

Trotsky was well ahead of the curve, when he invented the term “racism” and sent his Black African American army trained in Russia as Communism Ambassadors to occupy America (the Gog – Magog army’s very beginning). They set up the present Red Fascist occupation playbook used by Antifa, BLM, and other fanatical leftist communist groups. Then anyone even accused of racism (whether there is any proof or not) would be executed by the state. In many cases people lose their jobs and lives are destroyed although they fought for black empowerment their whole lives, just one statement was twisted to have an alternate meaning by the radical leftist communists. All they have to do is utter the word. They use the most favorite Red Fascist Communist ideological word “racist”. Those parroting this ideological attack (aimed in prejudice  against European descended Christians) should be investigated for Felony Conspiracy with the outlawed Antifa and other communist terrorist groups. God said only 1/6 of this foreign army will escape, the other 5/6ths will find graves.

There is no statute of limitations on fraud and so passage of time does not make these false citizens now entitled to what they have gotten. Yet to prove we care about everyone, no one has protested. Our Peaceful behavior should be commended and we should start to see some equal justice now that there are abuses going for a very long time, going very far in the other direction. At least some equal truth and reconciliation to be restored in the system of Government, with it’s political open and official wing of state policy. All Christians must consider being involved in politics to help bring honesty, sobriety and our winning good order of our God’s law in the face of the losing chaos.

Since the 1965 “War on Poverty” initiated under President Johnson and the US Congress, blacks have received more than 15 Trillion dollars in reparations for slavery. However this has not resolved the outstanding issues.

The forced (integration) mixing programs have costed untold Trillions more. Each time a new program is launched it creates so many problems that more are required to deal with the new chaos. The results of such programs have not amounted to an overall reconciliation, but (as is shown daily even by the leading sports figures and other leaders, including Oprah, and several former Obama cabinet members calling for total extermination) has proven to feed the case that it has only fed the problem. The solution is proven on each case that the true peace comes through peace with God, and God told us all “come ye out from among them and be ye separate”. All of these groups want a government of their own that has nothing to do with White Society, and especially nothing to do with our Christian civilization known from English Common law and other systems of law and order from the European Christian descended nations. Even at Harvard University they are saying “whiteness must be exterminated” in order for blacks to feel free.

We are quoting only what the mainstream sports figures etc call the “Systemic White Supremist Nation”. They are also saying that because America was founded by such and only for such, it’s the reason why they are pillaging, destroying monuments, bowing / kneeling and disrespecting the National Anthem, the Flag and the laws, and pledge their allegiance to the Red Fascist forced-integrationists, bowing in allegiance to Antifa, and bowing in allegiance to the LGBT anti-family organization calling itself Black Lives Matter.

Watch and listen in on some of the good news how this will end:

RED FASCIST LGBT DICTATORS Raising their Absolutist Ideological flags over every  Government buildings, forcing cities to make policies that force citizens to stop respecting their establishment of religion, which says that all sins must be rejected, confessed and repented from.

We have now hundreds of photos and videos of half naked men in lingerie (and sometimes full nude) doing sexual gestures and sexual dances inside of elementary school settings. This is part of the “mandatory” “safety training” and “human rights training” for the children. In half the states in the USA this is now signed by Governors or other disputed by Renegade judges (appointed by the illegal alien Obama) and made into unconstitutional and unfathomable compulsory crimes against all laws.

In many regions, the School Districts now require a minimum of 10 times per year that all students are visited, and all equally receive “sexual identity” training from a very young age. They say this is to reduce the feelings of shame. The visits are exclusively to hear from one side, from the “pride educators”, from these approved groups such as these in these photos, teaching the kids their absolutist fanatical ideology, although it goes against science and basic health: 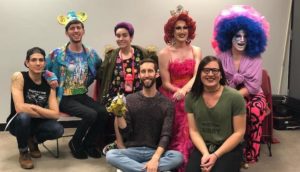 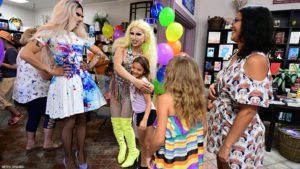 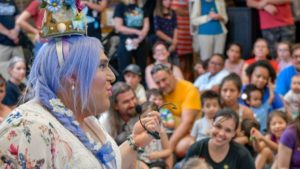 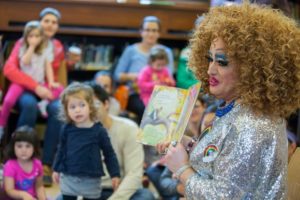 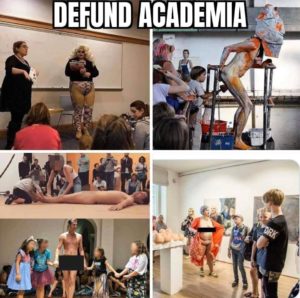 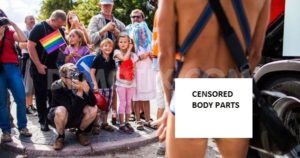 This is all denying the Human Rights of Christians to associate based on the criteria of their creeds, that all sins must be rejected and people can be healed from any kind of sin. Pastors are being threatened by these pretenders in government, and using color or law (unconstitutional laws) to harass and force a new system of faith, banning all other faiths. The faithful (who have in every church worldwide, always had the definition of sin to include these, and other sexual sins) are terrorized. However this is not exclusive to religion, as even medical doctors abused and threatened for quoting the scientific facts such as:

You are “200 TIMES MORE LIKELY TO GET HIV”, and many other more deadly contagious diseases, 15 times more deadly than smoking cigarettes, and yet government gives no warning, but actually forces the entrainment to the contrary.

Renegades in power are promoting these unhealthy practices, for one main reason, it is done with hatred and intent of destruction of the Christian society, and is done with extreme prejudice against all establishments of religion.

This is all part of the red occupation of our Christian society of law. We know BLM was founded by 2 Lesbians also. Here’s a new Disney Demonic cross eyed LGBT character sent to manipulate, brainwash and control our children.

We pray for freedom to do as it is reiterated in the New Testament to “come out from among them and be ye separate” AND “teach all nations to OBEY the commandments (the great commission).”

At Watchman News Dr Brunswick recorded his version of the Soon Ending of their RED FASCIST Occupation. They all admit they are here to https://www.youtube.com/watch?v=VhKHOAfiK6k

Disney has made history with its first bisexual lead character in a kids’ show, according to reports. Luz Noceda, the 14-year-old lead in the Disney Channel’s animated series “The Owl H…

Whites are afraid to protest as they will be called racist and lose their jobs. This forced mixing ideology is the cult state religion brought in by the communists. The “systemic White Supremist” nation is being attacked and occupied. In 1923 the Supreme Court reiterated the 1790 law that only Whites can be citizens. It wasn’t till the 1965 Immigration Act that some of that was lifted. The invasion and occupation of the “systemic White Supremist” nation is at its height. We cant say much more about this all, just the quoting leading sports figures etc.

For now what can you do? Forward along this email to someone you care about. Maybe use “google translate” of the online version of this message as found at https://orthodoxchurch.nl/ You can join our Templar Order anywhere in the world. Join the Priory of Salem – Institute of Peace Studies, or for now help the persecuted Europeans who have been undermined for agreeing with our lawful US President. Join our Europeans and Brits for Donald Trump Group.