Dr. Stephen K. Brunswick who last week covered these topics at length, including the Biblical laws and many curses involved in removing monuments and renaming landmarks, etc, as quoted from the Bible “not to remove the ancient landmark”. He also shed much light on the many New Testament admonitions to refrain from interracial mixing, but to “come out from among them and be ye separate”.

Watchman News is posting this Dixie Corner update in Agreement with our United States President, “it was bad for ratings” to ban the Confederate Flag, and “where is the apology from Bubba?” to all those who stood by him, only to find out it was another totally Smollett style Fake hate-crime Hoax! a true Hate Crime against NASCAR and the innocent vulnerable populations of the South who never had such illegal lynchings, and MOST DO NOT KNOW that such Southern Confederate states were the FIRST to ban Slavery. Lincoln didn’t even add slavery as part of the war effort until years into the war, long after invading the Free Union of Southern States. Slavery today has taken another form without the States Rights being recognized. Read about this deeper pre-Dixie times Perpetual Confederation topic on our website section “Confederate America“. 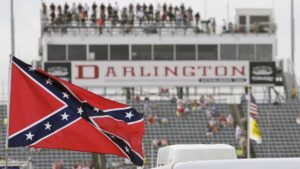 A Confederate flag flies in the infield before a NASCAR Xfinity auto race at Darlington Raceway in Darlington, S.C. Bubba Wallace, the only African-American driver in the top tier of NASCAR, calls for a ban on the Confederate flag in the sport that is deeply rooted in the South.
Photo: Terry Renna/AP

The Sons of Confederate Veterans demand that NASCAR apologize to the American people in general, and the Southern people in particular, for supporting an obvious hoax. This hoax has been used by radical leftists to promote their campaign of hate against traditional American values and the true history of the Southland. The Sons of Confederate Veterans, a veteran’s organization with a diverse membership, fully supports the American concept of freedom of speech and expression. We therefore condemn NASCAR’s hate driven effort to slander Southern heritage and will continue our flyover protest campaign at NASCAR events. Our flyovers will display the Confederate Battle Flag and the message, SCV.ORG. We call on NASCAR to stop the hate and embrace all Americans, including Southerners.

(Please copy and send to your local news source) 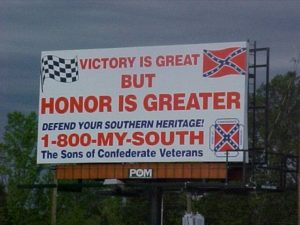 On Another note, an update from Miss Dixie: 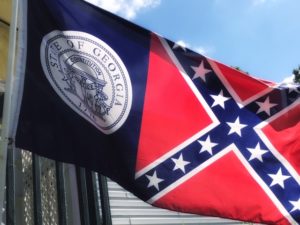 Good afternoon southern brother’s and sister’s! Hope everyone is alright,not much goin on in Kennesaw,Ga. right now. Hot and swampy feelin’, bet it’s worse in ‘Hot Lana’! National Guard on duty to protect monuments and buildings. Governor Kemp called them up. Marxist mayor upset cause he didn’t ask her permission! She’s too busy marching with blm and gaslighting everyone! Are you kidding me?? Hey stupid woman, he has more power than you,got it??

Is it OK to tear down our landmark statues? Street names, city names, school names, etc?  It’s happening and very real. Lets not even mention the Confederate statues for a moment. Right now the destruction is spanning all groups of people and all non-communist Monuments and landmarks. This is including the desecration of graves “writing they’re racist” over Iraqi war hero’s graves, ones who died in battle, etc etc. Columbus statues, Washington Statues, Teddy Roosevelt Statues, Abraham Lincoln, Grant, several Saints etc, burning several churches, attacking all churches that have religious icons or statues of Jesus, etc the list goes on and on all getting desecrated and destroyed when these should be respected as all landmarks should.

“You shall not move your neighbor’s boundary mark, which the ancestors have set, in your inheritance which you will inherit in the land that the Lord your God gives you to possess.

Do not move the ancient boundary
Or go into the fields of the fatherless,

‘Cursed is he who moves his neighbor’s boundary mark.’ And all the people shall say, ‘Amen.’

“..and He made every nation of mankind to live on all the face of the earth, having determined their appointed times and the boundaries of their habitation,”

“Do not move the ancient boundary
Which your fathers have set.”

“Some remove the landmarks;
They seize and devour flocks.”