True Israel Under Christ the King of kings and Lord of lords!
Office of the Primace
Uncategorized
Spread the love
Viking (Goths) horned helmets in our ancient coat of arms? 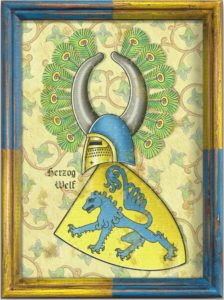 Someone recently asked, why do we have Buffalo horns on many of the Brunswick helmets in the Crests of the family coats of arms?
This is in all the heraldry of the present family and has been going back in every generation, even back to some older burials of Welf IV and his father, where the same viking helmet with gold shield and blue lion was used in the 10th century.
For those who had recently enjoyed the Winged Husar video and article, with protection as an order today by the House of D’Este Guelph Brunswick-Wolfenbuettel-Oels, Senior Branch, House of Welf you’re sure to like this one. You’ll find the main info in the description you will find an article about the succession of some major hereditary alloids of Gothia. At http://orthodoxchurch.nl you may also find many articles linking the Danes, Germans, Ukrainians and Polish within the original estates and present ceremonial orders of the Royal families of Gothia.
Does Divine Right exist? For the Christians we should at least remember this concept as Christ comes back as King of Kings and Lord of lords, where our Kingdoms become His Kingdoms. Notice it doesn’t say democracy or any of the non-Kingdom governments that were in existence in that time of the 1st Century? It says He’s coming back for 12 distinct tribes, not a mixed multitude that include non-related races of the covenants. Romand 9:4-5 says the adoption and the covenants of Israel’s God pertain to the people who are of the flesh and genealogical seedline of Israel (true Israel, of which even 90% of the 1 tribe called Judah left and became the nations of Troy, Sparta, Ireland(related to Galilean Celts), Italy, and Germany starting around about 1,000 years BC) the rest of the 12 tribes had left after Assyrian captivity in 800BC to be known as the Scythians, Goths, Barbarians, and NT calls them also “Greeks” while Christ said not to enter into the non-Israelite people’s cities (Matt 15:24) and not even go onto the roads of their race-mixed cities, and the Holy Spirit instructed the Apostles also in the book of Acts not to go in to many cities.
There are still in His system obviously even when there are temporary Republics that are within Empires and Kingdoms, and often 100-200 years these think they become fully independent and revert back. Still of course for America legally this can still be a union even under a Monarchy as it was before and after the English dominance as Confederate America, as America has always had a “Perpetual Confederation”. The non-Aristocratic structures don’t last long, as there’s only so long people can stand seeing theft and destruction continue out to everyone.
Christ did say that in this age only those who serve the most will be the greatest, and they who work as deacons more than they who work as high officials. We who serve our people the most automatically rule, and we who truly serve will acknowledge that which protects the ownership as found in the law.
Only in hell is a democracy, which is a state of overthrow, absence of law, and of mob rule that goes nowhere but down, stealing and destroying not only from the rich but from everyone, as it has in every communist country of the past.
Now statues are being destroyed everywhere. Now even pictures of Jesus are getting banned because He looks European. However anywhere you can prove that the Nazarene Celts of Galilee (which it says all His apostles were of Galiee were mostly all red-haired), while the ones occupying Jerusalem were descendant of Israel’s Canaanite enemies which occuped the land since the time Jeremiah Transplanted the Kingdom to Ireland in 500BC, more info at http://orthodoxchurch.nl (Our Ethnic Culture needs to be respected just as all should be.)
Have we seen enough overthrow of rights of family inheritance and ownership? The theft of one led to the theft of all. We can’t steal from one without stealing from all.
The USA still has a treaty with the House of Brunswick, to protect and restore the original estates, with the family of Wolfenbuettel (Gothia) now in exile. Please keep it in your prayers that we may expand more beyond the mere ceremonial orders, and have sufficient resource to retake our lawful inheritance, without being killed like our ancestor Ulric d’Este-Guelph Brunswick was killed/assassinated when reclaiming this inheritance just outside the courthouse after filing a winning appeal for us as his heirs in 1935. That court of Geneva Switzerland then published in the official records they will go on the offensive to stop his heirs just like they had stopped him.
We are seeing things developing in our Principality of East Frisia, and are presently issuing ID cards for our cultural self determination, for those who wish to be free citizens in our lawful independent Principality of East Frisia. It is a mostly an uninhabited land just between NorthEast Netherlands and NorthWest Germany, a land that long continued using the Danish Viking Runes, a land which the founder of the city of Brunswick was the Duke of Frisia (Bruno) and was simultaneously Duke of the realm of Saxony called Gothia, all the while his family were Emperors of Germany. Some awareness films are going to come out. However at this stage the fields of Brunswick keep us very busy working to keep the basic provisions of our house, for our heirs, Amelia, Allie and Matthew Brunswick. Take care and God Bless

Buffalo Horns on a Helmet being distinct to the Danish / Germanic / Goth descendant Royal families. Covering these with peacock eyes was a great sign of Noble right. This is an image of the original Buffalo horns of the main crest of the House of Brunswick (Este-Welf/Guelph). Although often the horns were more elongated as is seen in several of the Brunswick heraldic helmets. This is the Welfen coat of arms (around 1200) from the tomb of Welfs VI. and Welfs VII. in St. Johannes Baptist (Steingaden); originally: blue lion on a gold background (today in the Bavarian National Museum, Munich). The Helmzier, two buffalo horns decorated with peacock feathers, has been handed down to the Welfen in Braunschweig since 1290, and they later became today’s sickles. The coat of arms of the gentlemen of Ravensburg (Beienburg) in the Zurich coat of arms, who were in the service of the Welf Henry the Lion, shows both the lion (standing) and the buffalo horns decorated with peacock feathers.

A larger article on the succession of the House of Wolfenbuettel-Brunswick in several of the estates of the Ostrogoths and Visigoths (Gothia) may be found at: http://orthodoxchurch.nl/2018/08/ostrogoth-and-visigoth-united-royal-successor-house-brunswick-wolfenbuettel/

Another image from the article is also attached, demonstrating the main alloids (the hereditary estates) listed as their genealogical inheritance down to the main lines today in Brunswick-Wolfenbuettel. It is shown together with the Gottingen principality passing down (including Saxony through Henry the Lion etc).

(Note: Gottingen was spelled Swedish Gutingi in the oldest documents) 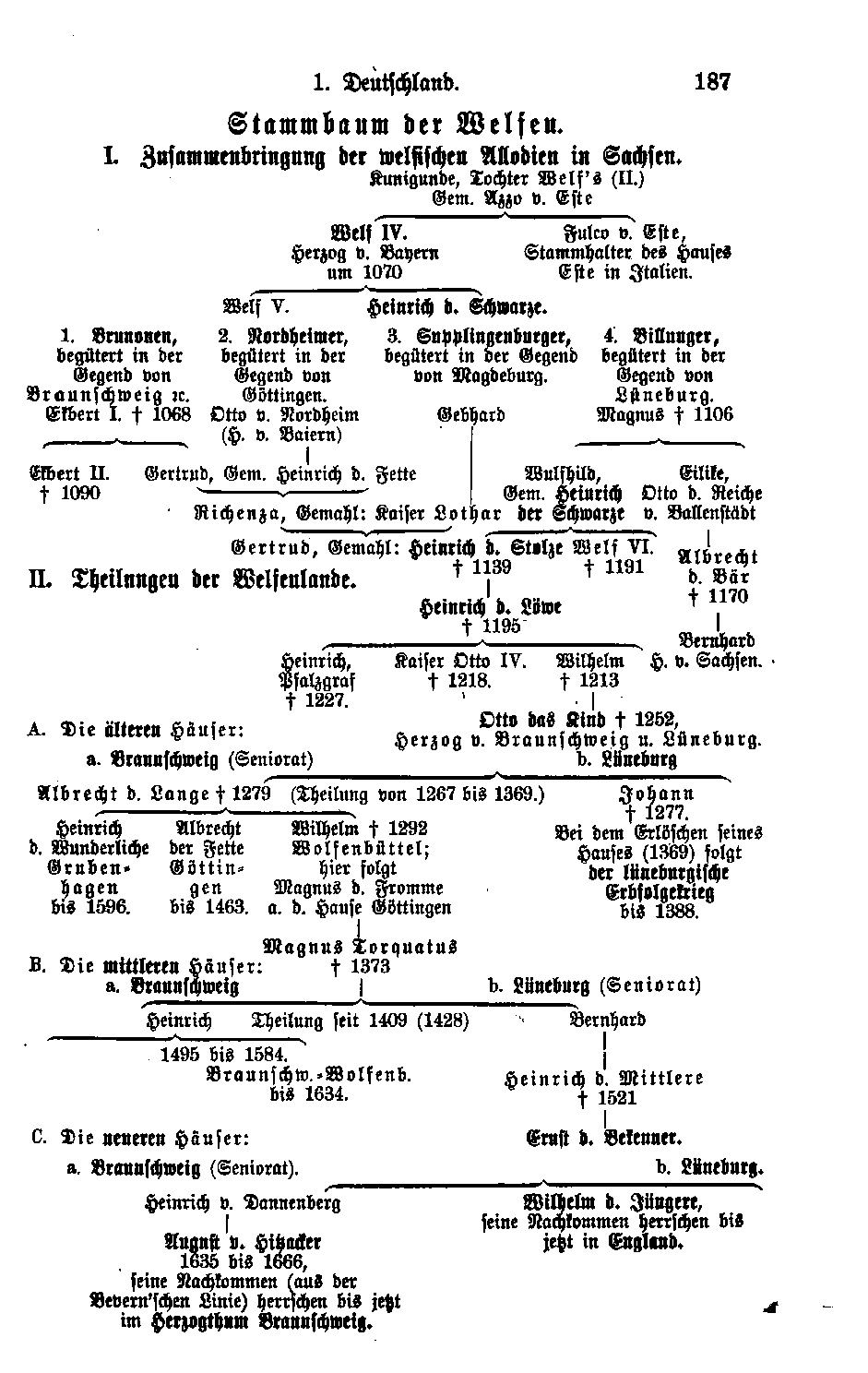