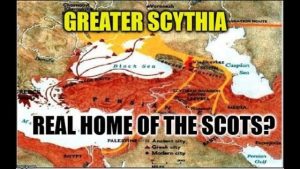 A much forgotten ancient truth……

The kindred ancestry with the Goths.
This legal document “Scotland’s Most Precious Possession”, their Declaration of Independence, was fought for by by the famed William Wallace, and was signed (and sealed) by Robert the Bruce and all the Scottish Nobles ultimately.
This document, the Declaration of Arbroath (of the original Culdean church), is posted at the front of most of the assemblies of the Culdees (OCC) for all to see when you enter into the sanctuary. The Culdees’ Church at Southern California, where our current Primace grew up into the holy orders (of baptism, confirmation, diaconate, priest and bishop),
always had a high quality copy of these articles in English as well as the latin posted near the entrance. A copy is depicted below. This was for all who entered the church to read and understand that our church is descendant of the original church of the Culdees of Scotland, who are successors of the church started by St. Aristobulus, St. Philip, St. Paul, and St. Joseph of Arimathea at the British Isles. Read the short history of the Orthodox Church of the Culdees(Celtic).

Below is some of the text from the Declaration of Arbroath, and some surrounding commentary. You may also wish to purchase the more detailed copy of an analysis by one of the foremost scholars on the topic of the Culdees (E. Raymond Capt) who was a frequent lecturer at our church. He published some other surrounding documents of Robert the Bruce that fills in a lot more meaning of these words. Mainly that Jesus Christ was central in his life and was present with them in battle. Click on the cover photo to the right, to be taken to amazon where you may purchase a copy.

Few know that Robert the Bruce was the last Scottish King to have been coronated on the throne of Israel, the stone of scone, that was then stolen by Edward Longshanks. It is in the official histories of England, Scotland and Ireland that it is the literal throne that King David of Israel was coronated on, and God had promised to always keep a descendant of King David on that literal and physical throne. This didn’t just go away in 500BC when all of Judea was destroyed, and Jeremiah went to the prophesied “Isles Northwest” as it says by the word of God that Jeremiah “transplanted the Kingdom and priesthood” to those islands. Later known as the Culdees.

This declaration is more proof the Scottish and kindred peoples (Culdees) are Israelites. more info

The Declaration of Arbroath(Scotland’s most precious national possession), as sealed by Robert the Bruce and his nobles is portrayed below. It contains the claim of being confirmed in the faith by Saint Andrew(historically by his assistant Aristobulus). It says that the Scots “journeyed from Greater Scythia by way of the Tyrrhenian Sea….they came twelve hundred years after the people of Israel crossed the Red Sea[ca.250BC], to their home in the west where they still live today.”

The British historian Bede, writing five hundred years earlier, also stated that the people of Scotland came from Scythia, between the Black and Caspian Seas, where Israel was dispersed. Herodotus called the Scythians the “Sacae,” which comes from the name Isaac, one of the names that Jacob (Israel) said would live on among Ephraim and Manasseh (Gen. 48:16). God said “in Isaac shall thy seed be called”. Saint Paul reiterated these words, “in Isaac shall the seed be called” (Romans 9:8).

Read more about the

Foundational Evidence Scotland Is A Gothic And Orthodox Nation

Scots Are Called An Early Gothic Tribe By The Scholars, and codified in foundational charters of the nation.

Go to this article
http://gothianimperialknightstemplar.blogspot.com/2015/08/scots-are-goths-from-ukraine-region.html
Authentic quotes from the major historians:
article from www.OrthodoxChurch.nl
← Previous Post
Next Post →