MIGRATIONS OF THE GOTHS 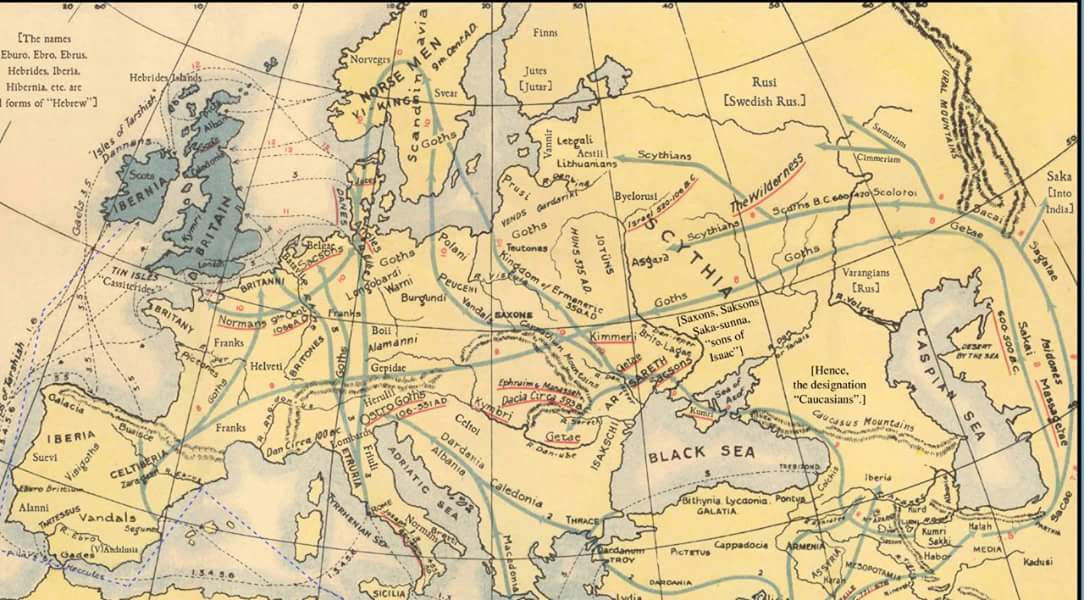 (enlarge in other window)

If any are interested in getting this graphic in the larger format contact us. It is 12×18″ on thick poster paper, for mounting in your office. (From p. 44 of Robert B.’s God’s (TRUE)Chosen People
– Guthones / Goths / Getae / Jeats (“the people of God”); and Teutons (“of the whole tribe,” the name was originally Teutones Guthones and became shortened to Goth; Deutsche {German} and Dutch both come from the word Teuton);
[* it is also possible that the Danish tribe of Jeats derived their name from a variation of Jutes.]
– Celt / Keltoi / Galatai (meaning, “the hidden people”— “My people hath been a lost sheep… they have turned them away on the mountains: they have gone from mountain to hill, they have forgotten their restingplace…. Because [you] have forsaken Me, and have not kept My Law…. Therefore will I cast you out of this land into a land that ye know not …. [but] Mine Eyes are upon all their ways: they are not hid from My Face…. [but He will regather them] from all the lands whither He had driven them”; Jeremiah 50:6; 16:11,13,17,15).
– Gaels / Gauls (some think that these two words are one and the same; however, I believe they are different. Most probably Gaul comes from the Hebrew gaw-al, numbered as #1350 in Strong’s Concordance, which means, “to be the next of kin, to redeem” or even “redeemed” or even “avenger of blood”). However, I believe clearly that the word —
– Goth is from the Israelite tribe of Gad, which in Hebrew is #1410 gawd, from #1464 guwd, “to crowd, attack, overcome, invade”, which is related to #1413 gawdad, “to crowd, gash (as if by pressing into)”. Clearly this explains the behavior of the Goths, as well as the Celts who spread across Europe even earlier than the Goths.
Gadhael, Gaidheal, or Gaoidheal, was the national name of the Celts of Caledonia (Scotland). However, the Roman Gallia was not from the Celtic root gal, but a Latinization from the Teutonic wal (the Germanic w often becomes g in Latin-based languages; as evident in the famous Welf and Waiblingen families of Germany, which became Guelph and Ghibellene in Italy). Strabo, the Greek geographer, of the early Britons, recorded: “a plaid wrapped around his body, …. He spoke Greek with a fluency, that you would have thought he had been bred up in the Lyceum, and conversed all his life with the Academy of Athens”. Similar things have been said about the early Scots; which is no surprise, since the ancient Britons, Cornish, Welsh Silurians, and Merovingian Frankish kings all traced their ancestry to the Trojans (Greeks from Troas). John Eadie recorded in his, A Commentary on the Greek Text of the Epistle of Paul to the Philippians (1859) that the words Galatae, Galat, Galli, and Kelti are the same word and that the ancient name of Scotland, Caledonia, named for the Caledonii, is from the Greek words Kalatia / Kalaton. He also says that Gael is contraction of Gadhael, Gaidheal, or Gaoidheal, and are responsible for names such as Argyll (Ar-gadhael). He says the words seem to be related to the Irish, Gal, “a battle cry”, and Gala, “arms”; and will therefore, mean, “armed” (translated as pugnaces, aramti, in Latin). Strabo recorded that they were “warlike, passionate, and ever prepared to fight”.