America’s first constitution declared that our government is a perpetual Divine Theocracy under Jesus Christ the King, joined together for one aim, for the advancement of His Kingdom on earth. In this article I will prove it to you it is still in force as legally binding, and is the legal foundation of our government’s legitimacy today. This document “the Fundamental Orders” is also regarded everywhere as “America’s First Constitution”. It was enacted in Connecticut on January 14th, 1639,  later re-enacted and adopted by all other colonies. It did define and permanently ratified our perpetual American Union to be for the Kingdom of His people under Jesus the Christ. This article pre-dated the English dominance and made no mention of any worldly power. Jesus alone was mentioned, and His laws, as our Supreme Authority. Afterward, as I will quote below, all other colonies adopted the articles with the text re-summarized as “a perpetual confederation having one and the same aim, the advancement of the Kingdom of Jesus Christ, and maintaining the purity of the gospel.”

“an orderly and decent Government established according to God, to order and dispose of the affairs of the people at all seasons as occasion shall require; do therefore associate and conjoin ourselves to be as one Public State or Commonwealth; and do for ourselves and our successors and as such as shall be adjoined to us at any time hereafter(perpetual), enter into Combination and Confederation together to maintain and preserve the liberty and purity of the Gospel of our Lord Jesus which we now profess, as also, the discipline of the Churches, which according to the truth of the said Gospel is now practiced amongst us; as also in our civil affairs to be guided and governed according to such Laws, Rules, Orders and Decrees as shall be made, ordered and decreed as followeth,”

This is the definitive proof of the establishment of our Divine Theocracy that reigns supreme as the legitimacy of our law of the land today.

You can help us get this information on our Perpetual Union of Confederated Sovereign States to be known via “TARGETED ADS”.

After the revolutionary war our “union” was called the Articles of Confederation. The “PERPETUAL CONFEDERATION” referred to in our founding constitutions means it has been ongoing since the beginning, and is without end. In the dictionary the word perpetual means continuing from the beginning, also “everlasting” or “eternal”, meaning, it as it always was and always will be. The present constitution of the United States which was written before any civil war, refers back to our Perpetual Confederation or “Union”(starting in 1639). This specific confederation is specified. That is both in the 1639 and later 1643 adoptions the confederation is defined in it’s text (text posted below underlined and in italics). All the original colonies called this Christian covenant of our forefathers to be the only existing union of America. America’s constitution refers back to the “perpetual union/confederation” when it says “perfecting of the union” in the opening statements. Only hundreds of years later Unlawful and Unconstitutional states have arisen with only a defacto corporate status, not of the People. “Perfecting this union” can only be done with knowledge of what is that perpetual union is and was for.

The Purpose and Legal Basis of our Union

The beginning of this Confederation is clearly shown to have originated in America’s first Constitution in Connecticut. Connecticut is called “the Constitution state” for this reason. The first constitution was called “the Fundamental Orders”. The text was copied and the rest of the states adopted it, as well as incorporated the phrases refering to Jesus the Christ, etc in the subsequent Articles of Confederation.

It was also the first ever Constitution that gave no creedance to worldly powers or Monarchies. All allegiance was to Jesus Christ’s sovereignty, as was in most of the founding state’s constitutions (before the civil war fraudulent defacto state corporate entities were Unconstitutionally formed). In all the founding documents we read (such as in the first “Articles of Confederation in the early 1600’s) that our Confederation was for Jesus the Christ and His Kingdom Governance on earth. You can also view the later versions of the Articles of Confederation that widely adopted this terminology as the purpose being “Jesus the Christ”.

The second major round of the “Articles of Confederation” re-affirmed and re- published that same aim mentioned in 1639. So we see yet again in 1643 not only it says our Confederation is Perpetual, but it also says that we acknowledge Jesus the Christ as our Lord of the government. It begins with this most important clause the demonstrates our purpose of Union: “Whereas we all came into these parts of America with one and the same end and aim, namely, to advance the Kingdom of our Lord Jesus Christ and to enjoy the liberties of the Gospel in purity with peace; and whereas in our settling (by a wise providence of God) we are further dispersed upon the sea coasts and rivers than was at first intended, so that we can not according to our desire with convenience communicate in one government and jurisdiction; and whereas we live encompassed with people of several nations and strange languages which hereafter may prove injurious to us or our posterity.”

Read the full text of the 1643 Articles of Confederation at: http://avalon.law.yale.edu/17th_century/art1613.asp

Most encyclopedias say America’s present “union” started with the “Articles of Confederation and perpetual union”(perpetual in the dictionary means “continuing” or “pre-existing”. The “perpetual union” cited therein refers back to the originals adopted by all the said states which said for the first several hundred years that the one and the same aim of the union was, “For the advancement of the Kingdom of Jesus Christ, and for maintaining the purity of the gospel”. Some may argue a new union was established after the revolutionary war. However the word “perpetual” and “articles of confederation” were used again in the post-revolutionary government. Perpetual in the 1848 Webster’s dictionary also means eternal, pre-existing, as well as continuing. That union in Christ was the key, which also pre-dated the settlement in England, Holland, and other countries these Pilgrims came from. I will cite that Connecticut, where this was first written was called the Constitution state, and it makes no mention of Great Britain or any other earthly power. It gives credence only to Jesus Christ and His Kingdom on earth. Since it is called “perpetual” it means it cannot be ended, and remains the foundational basis in law for America’s present sovereignty. When the next government picked back up that very same word “perpetual” it meant continuing that original Christian government and true Confederate structure.

No one can dispute the “one and the same aim” was for FREEDOM to openly obey the commandments of Jesus the Christ (Eternal God who visited us in a flesh body).

As you can read further in these original text, it says this “Union” was necessary to write down when our forefathers were a minority among many nations and strange languages who were injurious to them. It seems we’re now back in that situation where Christians are the minority among hostile foreigners.

The continuation of this “one aim” of our “perpetual union and confederation” has been retained as the legal basis for all subsequent constitutions. To remove God now out of the nation would mean to remove the entire legal basis of the present government, and all state governments.

As it says in the earliest articles of confederation that the Union is, and has been “perpetual”. The Union referred to in the Constitution didn’t just come out of thin air. It existed since the 1630’s in the legal form of the “Fundamental Orders” and the “Articles of Confederation”. So now we understand why it says “to form a more perfect union”, not to annul the previous, but to strengthen and perfect it. The union had already for 300 years referred to guarding the “purity of the gospel of Jesus Christ”. The Bill of Rights, ie “freedom of assembly/association” and freedom to disassociate as is in the Commandments, has helped us to live as Biblical and Constitutional Sovereigns should.

No other union exists except the fraudulent British corporation registered after the civil war which has usurped the name “United States” and has been admitted by all sides only has jurisdiction to operate in their lands, ie Washington DC.

Text of America’s First Constitution (later copied to all states as our perpetual union and confederation): 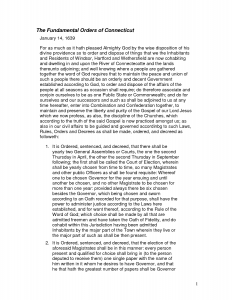 Help us advertise the facebook page to educate more about the legal basis of our Perpetual Union of Confederated Sovereign States (for freedom to obey Jesus Christ and His Law Governance on Earth).

CON  (together with) Federation ( FEALTY- LOYALTY)  There can be no FEDERATION alone but but by JOINING IN FEALTY. All states were originally Confederate under Article 1 Section 1 of the US Constitution.

Rather than leaving Article 1 Section 1 alone in the US Constitution, there were many states formed after the civil war (like Nevada) that go totally contrary to it. As it says in their new corporate defacto state constitution that “all power is in the United States Federal Government”. Nevada’s constitution is fraudulent since it has that terminology, it is illegitimate as a government and exisists as a mere corporation. Any presence of fraud vicerates contract. The Bundy ranch is following sovereignty law that is guaranteed to the people of the state, over and above that of the federal. There are many examples of where these have become corporations that no longer govern. One being they have abandoned the Perpetual Union,  and another being they go totally contrary to the US Constitution (the true perpetual Confederated Union of Free Sovereign States).

As it says in the US Constitution Article 1 Section 1 that “the power is in the people who are represented by the independent states”. Read more about “Defeating Land Tyranny” in our archive.

All the original state Republics are demanding their freedom to once again go back to their independent status so we can worship God without interference.

If you want to fund our ads, go to our contact page.

For more information read these articles: