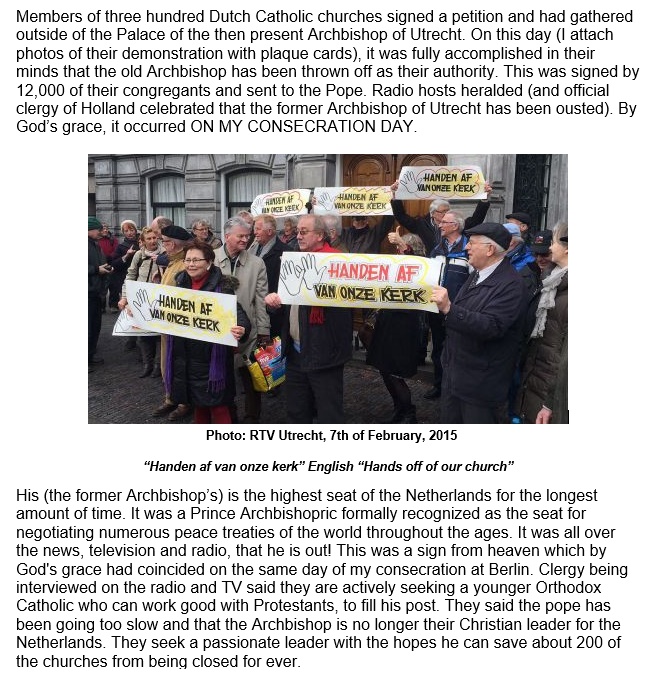 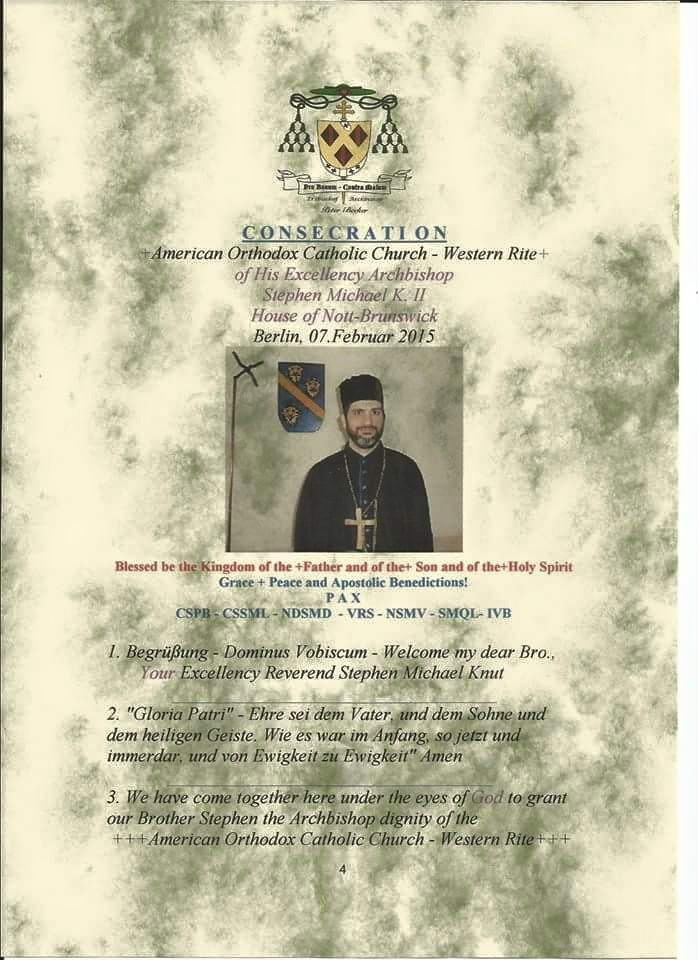 As forwarded from His Eminence Abp. Stephen Michael ++

On the day of my consecration at Berlin in the AOCC. (check the dates), The very same day I was consecrated at Berlin, by God’s grace, it was met with with a most epic response. This is something that I believe has never happened before to a currently ruling Archbishop.

Members of three hundred Dutch Catholic churches signed a petition and had gathered outside of the Palace of the then present Archbishop of Utrecht. On this day (I attach photos of their demonstration with plaque cards), it was fully accomplished in their minds that the old Archbishop has been thrown off as their authority. This was signed by 12,000 of their congregants and sent to the Pope. Radio hosts heralded (and official clergy of Holland celebrated that the former Archbishop of Utrecht has been ousted). By God’s grace, it occurred ON MY CONSECRATION DAY. 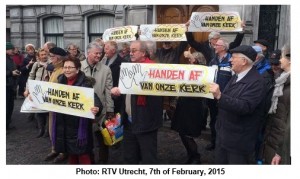 Photo: RTV Utrecht, 7th of February, 2015
“Handen af van onze kerk” English “Hands off of our church”
His (the former Archbishop’s) is the highest seat of the Netherlands for the longest amount of time. It was a Prince Archbishopric formally recognized as the seat for negotiating numerous peace treaties of the world throughout the ages. It was all over the news, television and radio, that he is out! This was a sign from heaven which by God’s grace had coincided on the same day of my consecration at Berlin. Clergy being interviewed on the radio and TV said they are actively seeking a younger Orthodox Catholic who can work good with Protestants, to fill his post. They said the pope has been going too slow and that the Archbishop is no longer their Christian leader for the Netherlands. They seek a passionate leader with the hopes he can save about 200 of the churches from being closed for ever.As you can read in the signed petition to the Pope, and clearly read on the posters the people officially divorced themselves from him, from that day forward (by God’s grace the day of my consecration, he is no longer their Archbishop). On the radio interviews (which are also recorded) you can hear representatives of the church saying he is out, and all broadcasters agreeing with the will of the people. I was ordained as a FUNCTIONAL/not-titular bishop in apostolic succession in supervision of three orthodox Archbishops, and by the laying on of hands from the Archbishop of Germany at Berlin.  I perform the daily Divine services for the whole of Benelux with head office at Rotterdam. We had a precondition of Sabbath and dietary laws to be recognized (as published in my books) to fully in agreement with orthodoxy. These were signed and sealed by the archbishops with the apostolic succession certification statements and communion agreements that preceded. Those are also attached the Documents as mentioned. Page 1 of consecration included only so you can see official date of the ceremony as it was performed at a special site nextdoor to the ministry of foreign affairs. Page 2 from local TV station, RTL TV, page 3 apostolic succession.
The ceremony of anointing was performed by the Archbishop of Berlin on this very same day of this event. We weren’t following what was happening in the rival church or at their archdiocese at Utrecht. This all just happened by Spiritual Divine Providence as a confirmation. The assisting Orthodox Archbishops also gave their certifications to the assisting in the consecration.
All three Archbishops recognized my Imperial rights and title in their certification of the ceremony. The anointing included the words “Emperor Elect”. The signs and results have shown it was effected at the spiritual religious and at the legal physical realms that I operate as  a true Sovereign Prince Bishop like my forefathers have, of the House of Brunswick.
For the Kingdom of Yahshua (King of Israel) on earth, as in heaven,
His Highness Prince Archbishop Dr. Stephen Michael Nott d’Este-Guelph ++
heir of the Piast Dynasty    heir of the Goths   Heir of the House d’Este-Guelph Brunswick
COMING UP SOON ARTICLE 2 explaining why this happened. Also will be demonstrated how it happened, (by the anointing). The steps will be laid out in the years leading up to it as well, showing what every believer is supposed to do and pray (straight from the word).
← Previous Post
Next Post →