“police negligence in farm murders adds to the problem” 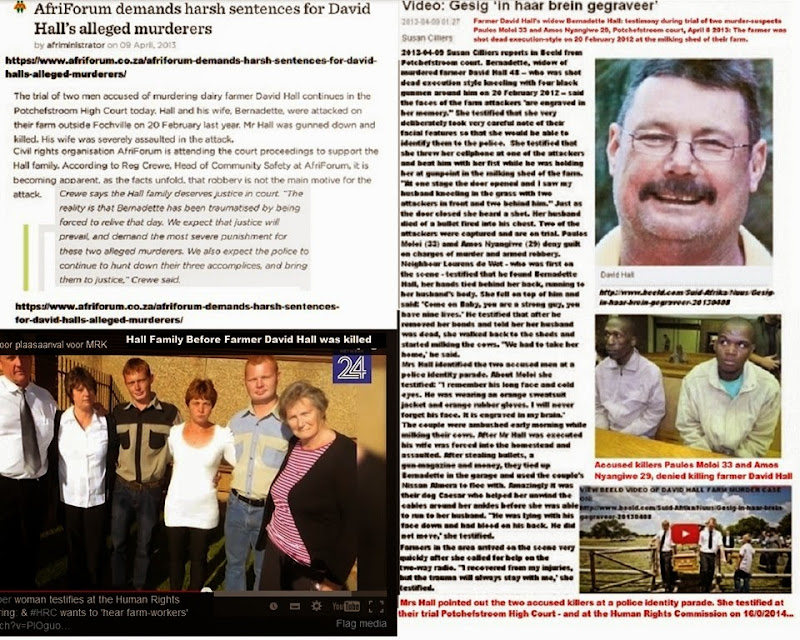 Caption above: two of the five farm-attackers went on trial: they were acquitted and can never be tried again, because somehow, the SA Police Service (SAPS) ‘had lost the forensic evidence’. The widow testified that she was ‘treated like a criminal by the court’ . She was never informed of her rights as a witness before or during the trial… Now, the widow often sees her husband’s murderers in town, she testified to the South African Human Rights Commission on 15 September 2014.

“FOCHVILLE — 20 February 2012 began as an ordinary day in the lives of David and Bernadette Hall. The Halls were milking cows on their farm, Buffelshoek, near Fochville.  There they were overpowered by five black male attackers at 6am.

Bernadette was tied up and assaulted with a blunt object. David was less fortunate.

DAVID WILL NEVER SEE HIS CHILDREN GET MARRIED…

“He will never have the privilege to stand back and see what he achieved in his life,” said Bernadette this week, testifying at the South African Human Rights Commission (SAHRC). “He will not see his children get married and he will never meet his grandchildren.”

What is even worse, is the fact that the assailants are still walking around as free people and that Bernadette sees them from time to time.

Below: she testified that ‘their faces are engraved in my brain”….

The case was not thoroughly investigated. Several forensic pieces of evidence, including a jacket, cigarette butts and the cables that were used to tie up Bernadette, were found at the scene. Initially, the police did not confiscate these items  until they were confronted about it by farmers in the community. This proved to be in vain …

(Two of the ) attackers were caught and charged with murder in court.  (above) There, however, the State could not prove a case against them because there was “no evidence against them:”

Nobody knows what became of the (forensic) evidence that was found at the scene.  Virtually the only evidence against the attackers was the fact that Bernadette identified them during an identification parade.  “I was there. I saw how they murdered my husband. I know who they are,” she later said. “

NO FINGERPRINTS TAKEN OF ESCAPE VEHICLE:

The Halls’ vehicle in which the attackers fled, was also found, but no fingerprints were taken on the vehicle.

The two assailants were acquitted.  And – because of the legal principle “autrefois acquit” (double jeopardy) these assailants can never be charged with the same crime again, even if the evidence should suddenly emerge.

I WAS TREATED LIKE A CRIMINAL DURING THE TRIAL: WIDOW 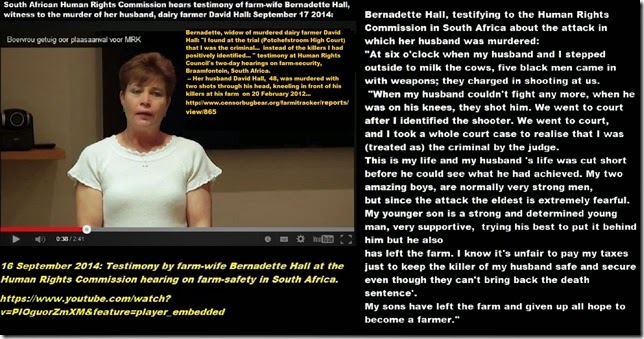 “I was treated like a criminal during the trial. It was very traumatic,” she explained. Her rights as a victim were never explained to her. Nobody helped her to prepare for the trial. In the court, she was attacked and humiliated by the assailants’ legal representatives.

But Bernadette is still on the farm. “Why do you not move to town?” one of the human rights commissioners asked her. “To farm is in my blood,” she replied.
“Since I was a little girl, I told my parents that I wanted to be a farmer. Nothing can replace the smell of rain and soil on the farm. One does not suddenly decide that you want to farm. “Farmers are born; people are not made into farmers.”

And then the dramatic statement: “I would rather stay on the farm and be killed than stay in town. I will not survive it.”

Today Bernadette is actively involved with AfriForum’s campaign against farm attacks. She not only supports it, but also takes initiative and arranges her own actions.

It is clear, though, that the police are not the only culprits in the fight against farm murders, but that the prosecution authority is just as guilty. The SAHRC was very much aggrieved by Bernadette’s story. Yet, she is no exception.

Nearly all the victims with whom AfriForum are communicating, complain that their cases are not followed up, that files and evidence disappear, that investigators do not answer their phones or do not return calls and that victims are treated like criminals in court. AfriForum has undertaken to submit a further report in this regard to the SAHRC.

Autrefois acquit: double jeopardy: “ Double jeopardy is a procedural defence that forbids a defendant from being tried again on the same (or similar) charges following a legitimate acquittal or conviction. In common law countries, a defendant may enter a peremptory plea of autrefois acquit or autrefois convict (autrefois means “in the past” in French), meaning the defendant has been acquitted or convicted of the same offence.[1]  http://en.wikipedia.org/wiki/Double_jeopardy