The 100 Afrikaner scientists and plutonium-enrichment experts who were building nuclear warheads for the country’s Air Force missiles left their top-secret concrete ‘Sirkel’ facility in such haste that some even left behind their uneaten sandwiches.  Rapport journalist Journalist Erika Gibson and  photographer Alet Pretorius were led around the concrete two-storey building by long-time Armscor worker Tim Smit, who had to light up the scene with a large torch because there’s no electricity inside the building any more.

It’s this torch-lighting which is providing a very dramatic effect – highlighting the dark secrets of this 45cm-thick concrete building perfectly.  Alet Pretorius has produced some very powerful pictures in this series:

Alet Pretorius published this dramatic photo-series on her blog, writing: ‘phones and furniture were left behind and the building is eerily quiet .” 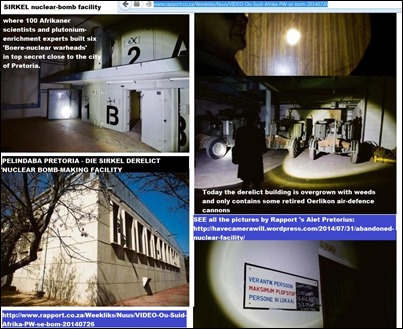 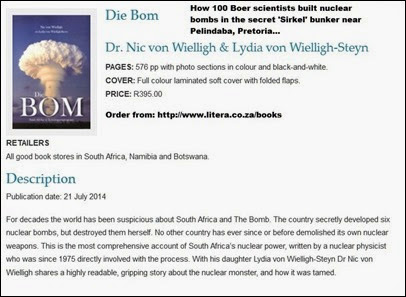 A book was written called ‘Die Bom’ by retired nuclear physicist Dr. Nic von Wielligh. He was closely involved with the ‘Boerebombs’ programme. “Die Bom’ is published (in English) by Litera Publikasies, it is seen as the most accurate version of South Africa’s nuclear weapons abilities.  Von Wielligh’s daughter Lydia von Wielligh-Steyn helped him turn the complicated scientific explanations into layman’s language.

“Very few South Africans know of the ‘Sirkel-facility’ opposite Pelindaba near Pretoria. And very few people know of the ground-breaking work undertaken in this top-secret facility – to build South Africa’s first nuclear bombs.
Pelindaba is South Africa’s French-built nuclear-research institute. The site used to belong to Afrikaans newspaper editor and historian Gustav Preller – whose deputy, legendary morphine-addicted writer/scientist Eugène Marais committed suicide with his shotgun in the shadow of a Karee thorn tree in 1936.

“The Sirkel building is a grey, windowless, concrete block with one entrance. It’s melting into the rough bush growth and the adjacent koppie next to the Gerotek test-site facility. The name of the building came from the circular track where Krygkor/Armscor, South Africa’s weapons-development company, used to test its military vehicles. The turnoff to the building was indicated with the sign ‘werkswinkel’ (workshop) to try and fool accidental passersby.

The security was tight: workers were driven there in white buses with painted windows which drove into the facility where every worker walked to his werk-station, said Tim Smit, managing director of Gerotek who has been at Krygkor for 41 years.Family and friends were not informed about the true nature of their work other than that the job was classified.
Workers at the Atomic Energy Corporation and Armskor were forbidden to meet socially.And they had to pretend to not know one another if they happened to meet by accident.

The head of security of Sirkel building had mounted an Uzi submachinegun beneath his desk for ‘quick use if it became necessary’. Today it’s very likely the country’s most expensive warehouse, a derelict from the heyday when South Africans were developing and testing nuclear-weapons. There’s no electricity in most of the building so our passage was lit with a flashlight by our guide Smit.
The walls are 45cm thick, with heavy electronically-operated doors to the gigantic safe. Nowhere, daylight could enter.

Smit said one safe was still found locked up when ‘his people’ were sent in to find out what had happened to the building after (FW de Klerk) closed down the programme.

She wrote: ‘The double-storey building’s ground floor was used to prepare nuclear-warheads and associated systems. There were eight dome-shaped isolated explosion-cells which would shoot open the roofs if anything went wrong with a test. There was very little time for any entertainment. The kitchen was small with a dining room where workers ate their sandwiches inside the building. They were not allowed to smoke: one little flame would have created a catastrophic explosion.

The rooms now contain the remnants of a damaged landmine-resistant Casspir-vehicle and a few written-off Oerlikon air-defence cannons. Its cold inside with narrow, curled passages to bar off the explosion-rooms even more. An emergency shower in one hallway bears silent witness to the radio-active material which was worked into nuclear-warheads.
Every other room is barred with another heavy safe-door. Once workers were inside they were only allowed back out in the late-afternoon when they returned home with the same white buses
with the painted windows.

There were no communication towers outside or on the building to keep the facilitity secret to satellite surveillance.

Gibson wrote that “South africa found an ally when it built its nuclear weapons in Israel,” however she provides no details on what kind of cooperation was given by Israel to South Africa.

Initially it was only planned to build six nuclear warheads here but Eventually 14 were being planned for. Israel had to quit its cooperation due to heavy pressure from the United States of America.

The first nuclear bomb was completed in December 1982 – a Christmas present to PW Botha. Today the only material left in the safe-rooms are two external fuel tanks for a Mirage fighter jet.
When the Soviet-Union collapsed, the Angola border war ended and P W Botha died unexpectedly of a stroke.

Gibson wrote that ‘the last chapter in the nuclear-weapons programme of South Africa played itself out when the SA Air Force which was in control of the programme as its end-user, deciced around 1992 to take the weapons from Die Sirkel to an ammo-depot near Roedtan in Limpopo. The decision was never followed up on.

A book was written called ‘Die Bom’ by retired nuclear physicist Dr. Nic von Wielligh. He was closely involved with the ‘Boerebombs’ programme. Written in Afrikaans and published by Litera Publikasies, it is seen as the most accurate version of South Africa’s nuclear weapons abilities.  Von Wielligh’s daughter Lydia von Wielligh-Steyn helped him to turn the complicated scientific explanations into layman’s language. http://www.litera.co.za/books

“Many rubbish stories have been publishedover the years about South Africa’s nuclear-bomb programme. “I try where-ever possible to provide the necessary documentation to prove the true version of events.  Where I didn’t have the answers, I also said so, ” said Von Wielligh about his book.

The entire article can be read in Afrikaans on: