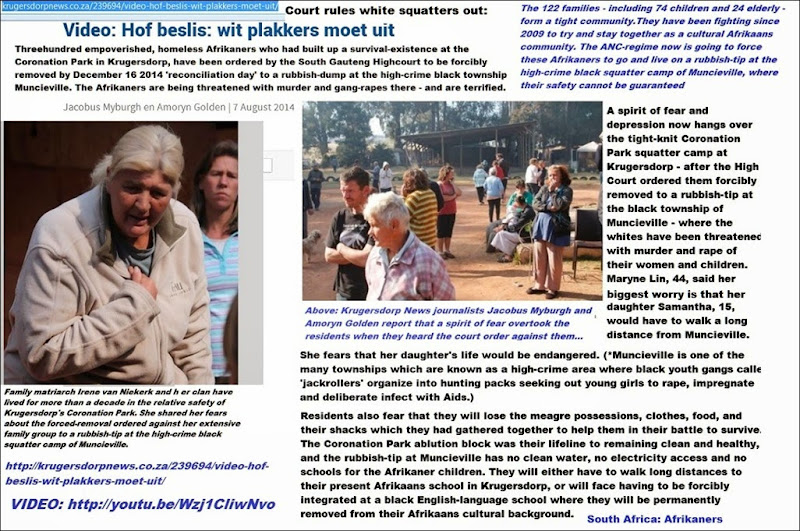 What the court-order entails is that 122 very poor white families with an average monthly income of R300 from private donors, and without transport, will have to move with their 74 children and 24 elderly, first watching their well-built shacks being demolished — and upon arrival have to raise corrugated iron shacks overnight at a trash-dump in Muncieville, where there is no running water, no electricity nor any safety for the group.

These 122 Afrikaner families which have fought since 2009 to try and stay together as a cultural Afrikaans community, now are being forcibly removed. The ANC-regime now is going to force these Afrikaners to go and live on a rubbish-tip at the high-crime black squatter camp of Muncieville. 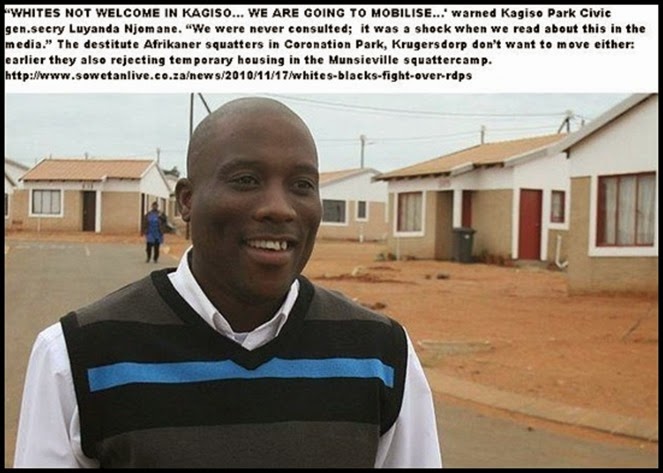 Whites not welcome in Kagiso: http://www.sowetanlive.co.za/news/2010/11/17/whites-blacks-fight-over-rdps

The threats of murder and rape also are based on fact: many black townships like these are infamous for its ‘jackrolling’ youth gangs which roam the streets looking for vulnerable young girls to rape, impregnate and infect with AIDS -deliberately. They call it their ‘fun’. 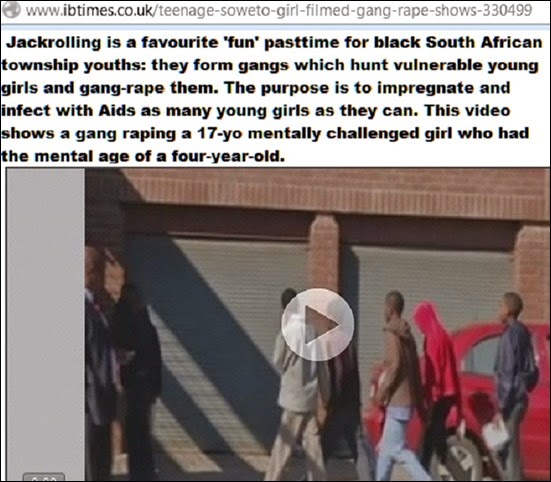 One of the residents of the Coronation Park internal refugee camp for homeless Afrikaners in Krugersdorp camp is the valiant young Afrikaner athlete Irene van Niekerk, – direct descendant of the South African boxing champion Jimmy Abbott. Irene, despite having lost all her toes in a fire-accident, still is a star athlete at her school.
She has been interviewed often by foreign journalists and is a charming girl, a natural story-teller. Her motto is: ‘ never give up’. 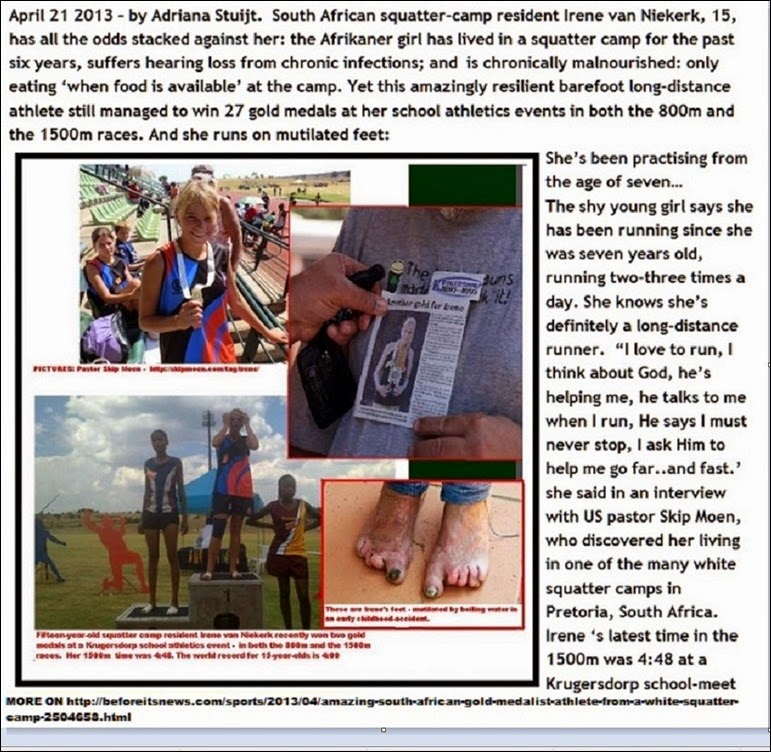 The Van Niekerks are the direct descendants of the Welsh goldminers who worked at the Witwatersrand mines from the 1920s and were imported by the British colonial government. Their extended family used to live at the Honeydew smallholdings near Randburg, north of Johannesburg. They  have always been known as the ‘ultimate survivors’ who were never wealthy, but formed a tight-knit community which helped each other in their daily battle to survive their tough working-class lives. Many ‘upperclass’ Afrikaners look down on them – often deriding these less-educated Afrikaner groups with the namee ‘ma-plotties’ which translates to ‘lowlife black smallholders — for their survivalist, non-conformist lifestyle. It would be similarly derisive to calling white working-class people in the USA ‘trailer trash”.

News also arrives from other areas in South Africa that the ANC-government has clearly taken a high-level policy-decision to remove many of the sonamed ‘poor white squatter camps’ out of the public eye as they can: they are beginning to draw a lot of unwanted, international attention. There are ethnic-cleansing plans for ‘poor whites’ in other municipalities in South Africa such as Reitz in the Free State and Boksburg (below) – forcing these ethnic-Afrikaners from their life-long cultural areas into regions where they are not only hated, but their children also lose their links to their cultural heritage. 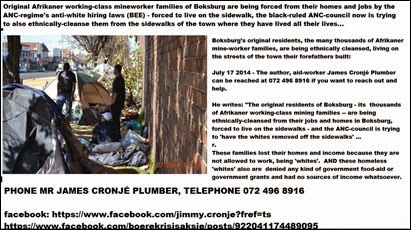 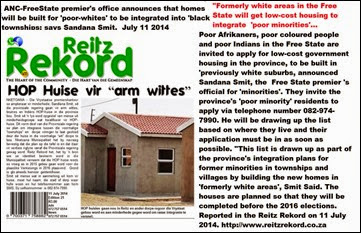 It is against the International Genocide Convention of the United Nations to deliberately alienate the children of cultural minorities – such as the Afrikaners – and force them to accept the culture of the majority. But that’s exactly what the ANC-regime is doing through their deliberate impoverishment of the Afrikaners – which forces them out of their own cultural backgrounds.

Ablution block at Kroningspark was their lifeline: now being taken away

Yet the tough-minded Van Niekerks and the 122 families who depend on them, all managed to survive everything thus far:  because they could fight it out together at the Kroningspark – with the local ablution block with its clean water as their lifeline to survival and staying healthy.

South Gauteng (‘Transvaal’)  High Court orders forced removal of 300 poor Afrikaners to a rubbish dump:
August 7 2014 – 300 poor Afrikaners -including 74 children and 24 elderly – forced to move to garbage-dump at violent-driven Muncieville squatter camp:
The Van Niekerk clan – descendants of kickboxer Jimmy Abbott – have heard in the High Court that all 122 households will have to move to the garbage-tip at Muncieville by December 16, 2014, sonamed ‘Reconciliaton Day”. The Krugersdorp ANC-officials have allocated a garbage-dump at the crime-ridden black Muncieville squatter camp where they will be given some building materials so that they can ‘rebuild their community’.
—  Reported by Krugersdorp Daily newspaper Jacobus Myburgh en Amoryn Golden 7 August 2014     “What future will our people have here? We are going to die of misery (at Muncieville)’, said Kroningspark resident Maryna Lin. Some of the camp-residents attended the court hearing on August 4 2014 where the unidentified judge ruled that ‘all 122 households have to be moved by Reconciliation Day 16 December 2014.’ The Van Niekerks have fought their legal battle since 2009 to keep their community together at Coronation Park. The local ANC-regime wants to turn the site into a R22million ‘dreampark’. “We have been allocated a garbage dump at Munsieville. Give us rather another piece of land such as the Donaldson Dam near Randfontein where there are trees and playgrounds for the kids,’ said George Abbott. His wife Irene said ‘even that large open piece of land next to the Afrikaans High School Bastion would be suitable’. An atmosphere of fear now hangs over the camp residents. Several mentioned that Muncieville is far away from hospitals and schools, and that the white children would be at danger, having to walk long distances to school. There are no water- or toilet-facilities. What kind of future will we have there. We will die of misery.’ The residents also face having to lose all their basic donations for food and clothing. George van Niekerk says he gets about R300 a month and is afraid that their donors would not want to support them at Muncieville – a place where they know they are not safe: they have received death-threats from Muncieville residents before, and threats that ‘we will rape your women and children.” Adri Prinsloo 54 has lived at Kroningspark for more than a year and said she’d rather to to sleep ‘hungry’ than dirty – there are no ablution facilities at the garbage dump where the government wants the Afrikaners to go and rebuild their shacks. The oldest resident is the (grizzled, weather-beaten) Hannelie Grouws – she’s lived there for 15 years. She fears for her life and said the Muncieville squatters ‘will not accept us’. “Poverty doesn’t mean we aren’t proud, we want to keep ourselves clean at least’.
Her biggest worry is where they will sleep the first night after their first removal. “They are breaking down your whole house here at Kroningspark and then you have to rebuild it on the dump-site at Muncieville,’  she said. Residents are also expected to pay for their own transportation costs to the site – and none of them have that kind of money. Kroningspark was conveniently located at walking distance to town facilities. Some still have subsistence jobs which helps them survive nearby — and will have to try and find the money to transport them to work somehow if they are dumped in Muncieville.  Mr Van Niekerk said the ‘municipality has undertaken to provide corrugated iron sheets, nails and tools to ‘help them rebuild a new life’.

Whites not welcome in Kagiso: http://www.sowetanlive.co.za/news/2010/11/17/whites-blacks-fight-over-rdps