— In 2013, South Africa was rated as having more than double the world average for child homicides by the World Health Organization. 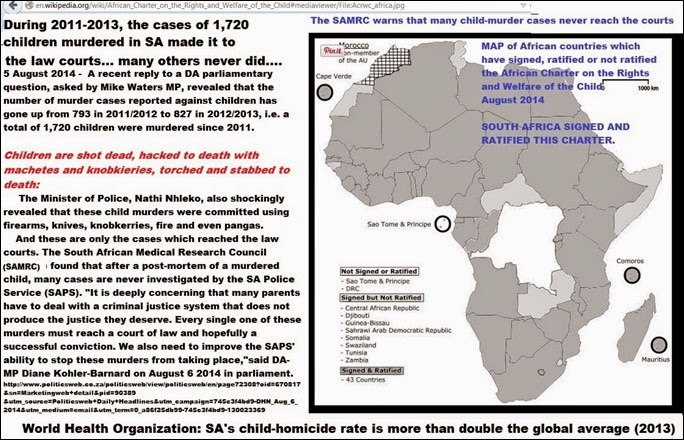 Above: Yet South Africa has signed and ratified the African Charter for the Protection of Children – but clearly are not protecting their children…

—  While South African children already are being murdered at a rate more than twice the world’s average by 2009, many cases are never even investigated by the SA Police Service after the post-mortem findings.
—  Some of these facts were revealed on 5 August 2014 in a reply to a parliamentary question, asked by Mike Waters MP of the opposition Democratic Alliance party.

The reply from the ruling ANC-party’s Minister revealed that the number of murder cases reported against children in the law-courts have soared:
— In the 2011/2012 SAPS-bookyear a total of of 793 child-murder cases were heard. But last year these rose to 827.

—  The Minister of Police, Nathi Nhleko also shockingly revealed in his reply, that these child murders were committed using firearms, knives, knobkerries, fire, machetes (he didn’t say, but should have said, that many girl-babies were abandoned or died from sexual assault due to witchcraft-practices).

— Important to note here is that ANC-minister Nhleko’s sampled data only takes into consideration those child murder allegations that have actually reached the law-courts between 2011 and 2013. It’s not known how many people were actually sent to prison from those cases – that’s the next parliamentary question to be posed.

“A Multitude of Child-Murder cases Never make it to Court…” 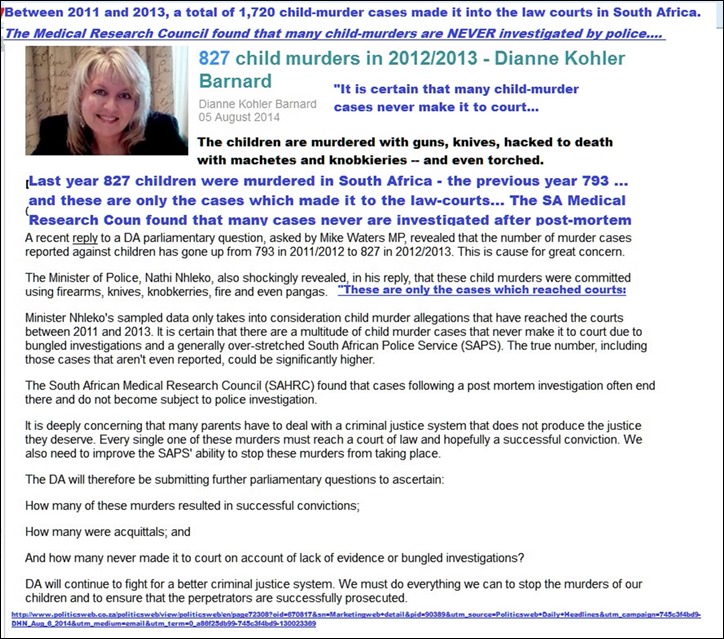 Above: MP Diane Kohler-Barnard commented that ‘it is certain that there are a multitude of child murder cases that never make it to court due to bungled investigations and a generally over-stretched South African Police Service (SAPS). The true number, including those cases that aren’t even reported, could be significantly higher. In fact the South African Medical Research Council (SAHRC) has found that cases following a post mortem investigation often end there — and do not become subject to police investigation. It is deeply concerning that many parents have to deal with a criminal justice system that does not produce the justice they deserve. Every single one of these murders must reach a court of law and hopefully a successful conviction. We also need to improve the SAPS’ ability to stop these murders from taking place.
“We will be submitting further parliamentary questions to ascertain:
— How many of these murders resulted in successful convictions;
— How many were acquittals; and
— And how many never made it to court on account of lack of evidence or bungled investigations?
“We must do everything we can to stop the murders of our children and to ensure that the perpetrators are successfully prosecuted.”
Statement issued by Dianne Kohler Barnard MP, DA Shadow Minister of Police, August 5 2014 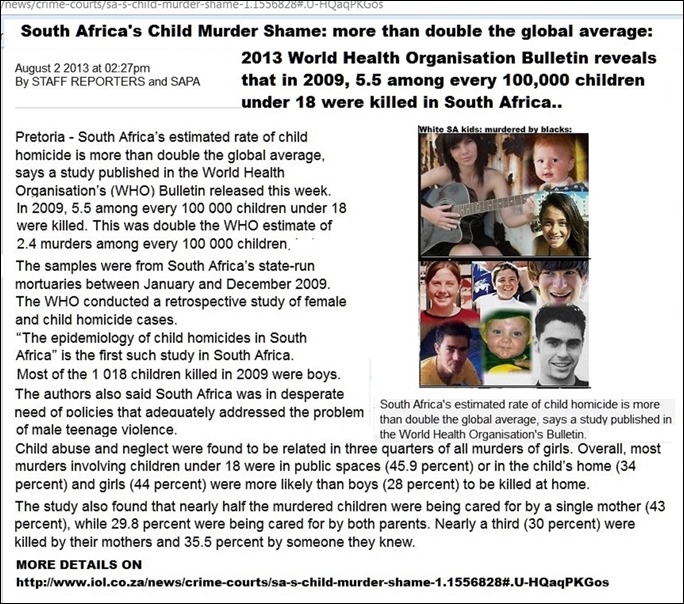 Above: State-Mortuary samples from 2009 already showed that 5.5 of every 100,000 children were murdered in South Africa at that stage. (‘official’ population:  51million)

Pretoria – Aug 2 2013 SAPA – South Africa’s estimated rate of child homicide is more than double the global average, says a study published in the World Health Organisation’s (WHO) Bulletin released this week. In 2009, 5.5 among every 100 000 children under 18 were killed. This was double the WHO estimate of 2.4 murders among every 100 000 children, but closer to the rate in other sub-Saharan countries. The samples were from South Africa’s state-run mortuaries between January and December 2009. The WHO conducted a retrospective study of female and child homicide cases.“The epidemiology of child homicides in South Africa” is the first such study in South Africa. Most of the 1,018 children killed in 2009 were boys.
—  The authors also said “South Africa was in desperate need of policies that adequately addressed the problem of male teenage violence.
“The most used murder-methods killing South African children were stabbing, bashing with knobkieries, slashing to death with machetes, and among girls: infant abandonment.
And many of the child murders ‘involved sexual assault” (*and baby-rape).

Map of African countries which have ratified the African Charter to Protect Children:
http://en.wikipedia.org/wiki/African_Charter_on_the_Rights_and_Welfare_of_the_Child