Pretoria. On June 14 1986, 28 years ago, Robert McBride – now the newly appointed head of the Independent Police Investigative Directorate — planted
one of his bombs – later ruled ‘crimes against humanity’ by the Truth and Reconciliation Commission — at the MacGoo Bar in Durban, killing 3 people and injuring 71.   He also planted a bomb in January that year at the Brighton sub-station in Zululand.

25 years ago it was reported that one of McBride’s injured victims, ex-cop Rudi van der Merwe,  has somehow battled on after he was maimed by the Brighton substation-bomb. 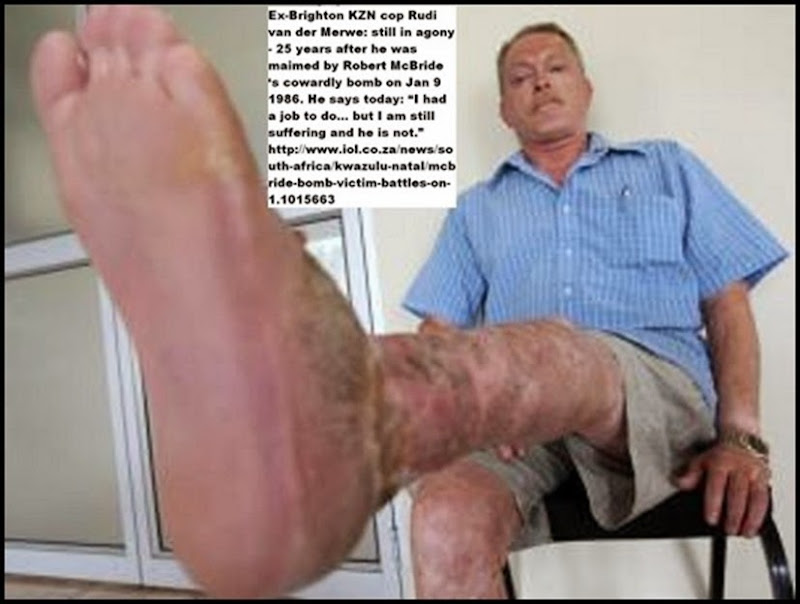 Three years ago, AfriForum paid homage to the civilian bombing victims of ANC-murderer Robert Mc Bride’s Magoo Bar’s bomb 25 years ago in Durban – which the Truth and Reconciliation commission ruled was ‘a gross violation of human rights’.

McBride’s bomb – for which he was given amnesty – dispelled the myth that the ‘ANC-struggle was noble and innocent?…’
Three civilian women died in the bombings and 71 civilians were injured.  The Truth and Reconciliation Commission ruled that these had been a gross violation of human rights.
“Few, if any, of the victims were members of the security forces.”   http://www.doj.gov.za/trc/

McBride can be legally referred to as ‘a murderer- court ruling.

The Constitutional Court also ruled three years ago that McBride may be legally referred to as ‘a murderer’ even though he had ‘received amnesty’.

ANC ‘struggle’ was neither noble, nor innocent: Afriforum:

Afriforum’s Charl Oberholtzer said at the time that ‘it remains important to commemorate the bombing which took place during the run-up to ‘youth day’ — to dispel the myth that
the ANC’ struggle was entirely noble and innocent.

“Our thoughts are with the next of kin of those victims who died and the 71 innocent victims who were injured in the blast,” Oberholzer said.

Victim Lorraine de la Rosa: “I don’t think that man has any remorse. I think he’s a very violent person:” 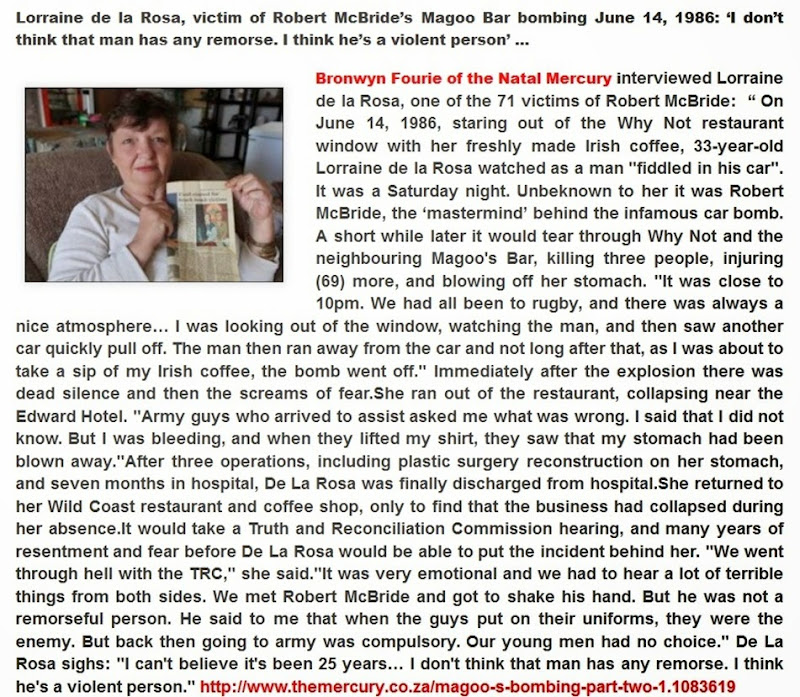 Above: Lorraine de la Rosa, victim of Robert McBride’s Magoo Bar bombing June 14, 1986 was quoted by Bronwyn Fourie of the Natal Mercury three years ago as saying:
“I don’t think that man has any remorse. I think he’s a violent person’ … She was one of the 71 injured victims of Robert McBride’s MacGoo bar bomb:
“ On June 14, 1986, staring out of the Why Not restaurant window with her freshly made Irish coffee, 33-year-old Lorraine de la Rosa watched as a man “fiddled in his car”. It was a Saturday night. Unbeknown to her it was Robert McBride, the ‘mastermind’ behind the infamous car bomb. A short while later it would tear through Why Not and the neighbouring Magoo’s Bar, killing three people, injuring (69) more, and blowing off her stomach. “It was close to 10pm. We had all been to rugby, and there was always a nice atmosphere… I was looking out of the window, watching the man, and then saw another car quickly pull off. The man then ran away from the car and not long after that, as I was about to take a sip of my Irish coffee, the bomb went off.”

Immediately after the explosion there was dead silence and then the screams of fear.She ran out of the restaurant, collapsing near the Edward Hotel. “Army guys who arrived to assist asked me what was wrong. I said that I did not know. But I was bleeding, and when they lifted my shirt, they saw that my stomach had been blown away.”After three operations, including plastic surgery reconstruction on her stomach, and seven months in hospital, De La Rosa was finally discharged from hospital.She returned to her Wild Coast restaurant and coffee shop, only to find that the business had collapsed during her absence.It would take a Truth and Reconciliation Commission hearing, and many years of resentment and fear before De La Rosa would be able to put the incident behind her. “We went through hell with the TRC,” she said.”It was very emotional and we had to hear a lot of terrible things from both sides. We met Robert McBride and got to shake his hand. But he was not a remorseful person. He said to me that when the guys put on their uniforms, they were the enemy. But back then going to army was compulsory. Our young men had no choice.” De La Rosa sighs: “I can’t believe it’s been 25 years… I don’t think that man has any remorse. I think he’s a violent person.” http://www.themercury.co.za/magoo-s-bombing-part-two-1.1083619