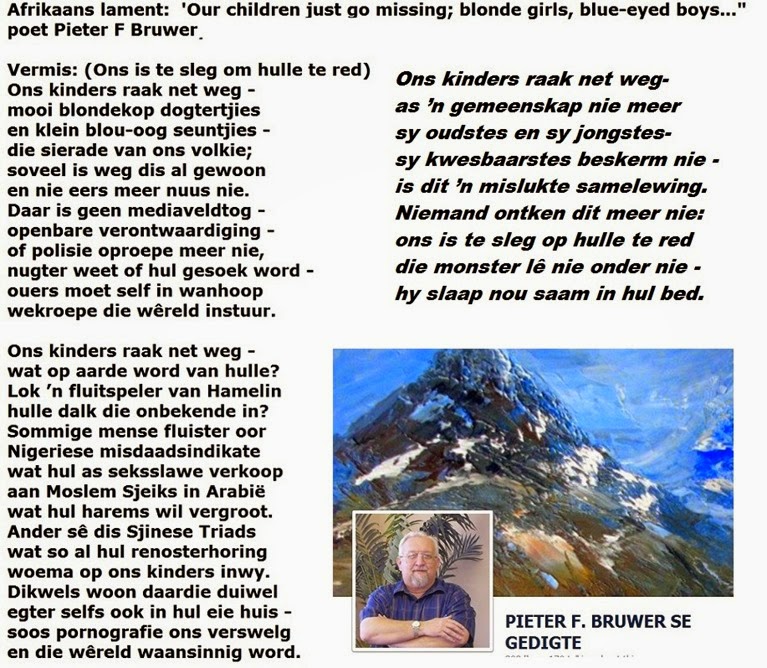 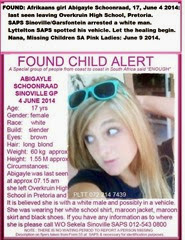 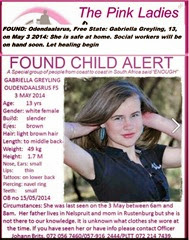 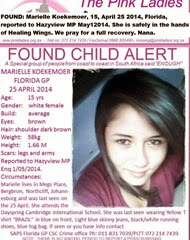 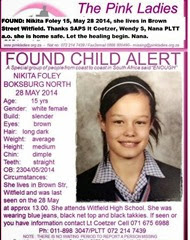 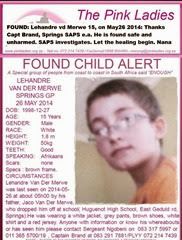 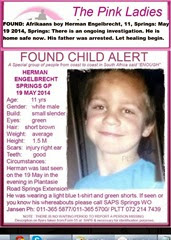 Circumstances: Herman was last seen on the 19 May in the evening in Plantasie Road Springs Extension. Herman was brought home last night (Friday) from “Warden” and the Investigating Officer WO Jansen verified and cleared it on Saturday 24th May that the case may be closed. He is safe home now. There is an ongoing Investigation. His father was arrested yesterday morning and will be charged with the necessary charges. Thanks to WO Jansen, Barries, Wendy Stephan PLTT his is back safe. Child protection unit involved and expect social workers to also be involved. Thank goodness for this one. Thanks all other role players. Let the healing begin. Nana Head Operations SA
https://www.facebook.com/photo.php?fbid=665102893562174&set=pb.373550099384123.-2207520000.1402550085.&type=3&theater
———–
Missing Afrikaans girl found: Geraldine van der Merwe, 13, May 9 2014. OB: 678/05/2014. 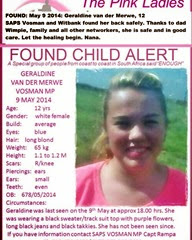 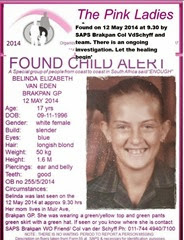 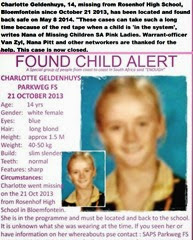 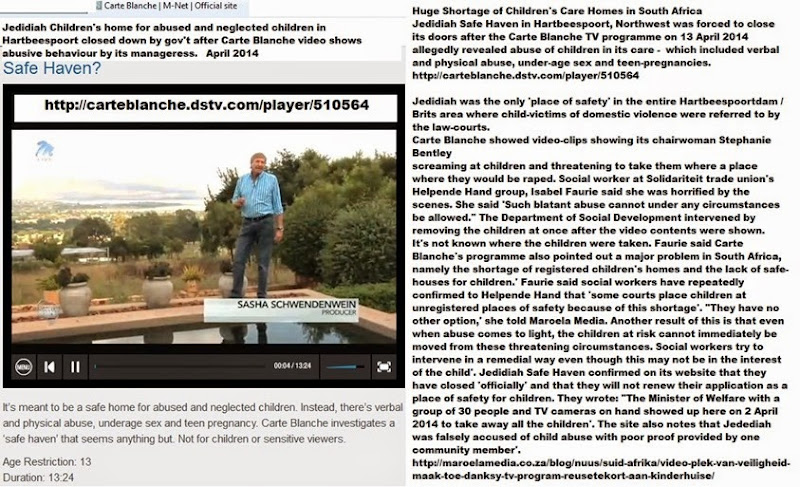 Jedidiah Children’s home, the only place of safety in the entire Brits region, where child-victims of domestic violence were referred to by the law courts, was forced to close its doors.

The children were taken away to an unknown place by social workers. Carte Blanche video showed abusive behaviour by its Afrikaans manageress.April 2014:

Kidnappings of children are censored by SAPS and by charities in South Africa: 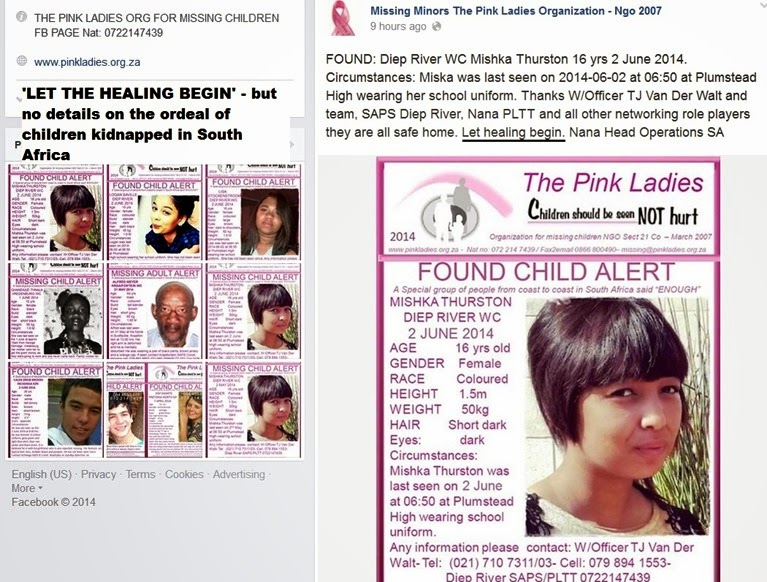 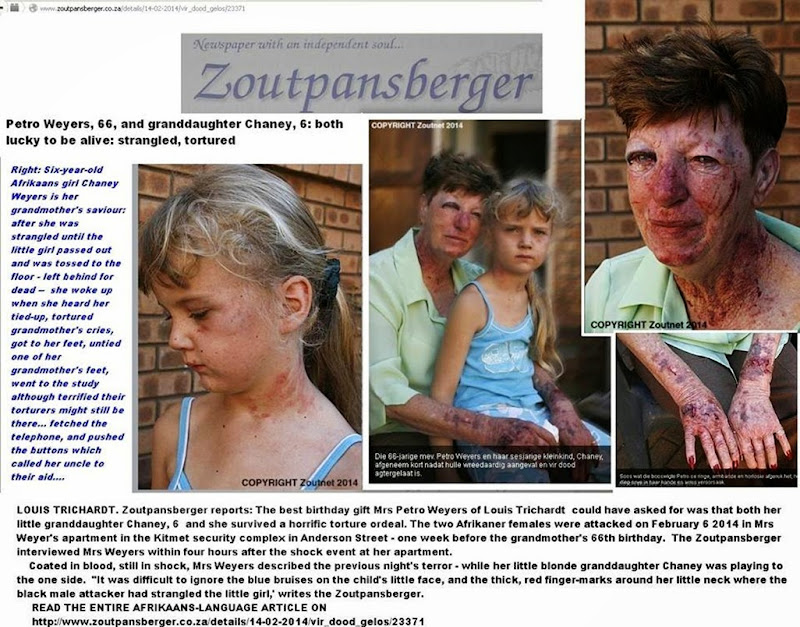 Above: 6-year-old Chaney was lucky to be alive after black-racist attackers in Louis Trichardt tried to strangle the child and her grandmother to death. The two were attacked and tortured on February 6 2014 in Mrs Weyer’s apartment in the high-security Kitmet complex in Anderson Street, just one week before the grandmother’s 66th birthday. A journalist from the Zoutpansberger newspaper described how Mrs Weyers, still coated in blood and in shock, described their night of terror. ‘It was difficult to ignore the blue bruises on the child’s little face and the thick, red finger-marks around her little neck where the black male attacker had strangled the little girl, writes the journalist. http://www.zoutpansberger.co.za/details/14-02-2014-vir-dood-gelos/23371

Sex-slavery gangs kidnaps Afrikaner mom of 5 young children to force them into prostitution: 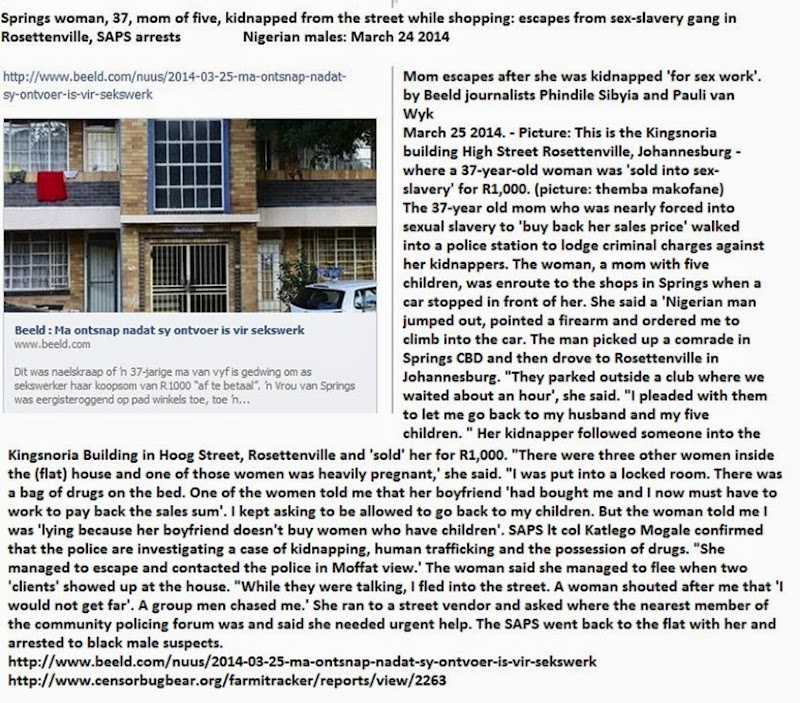 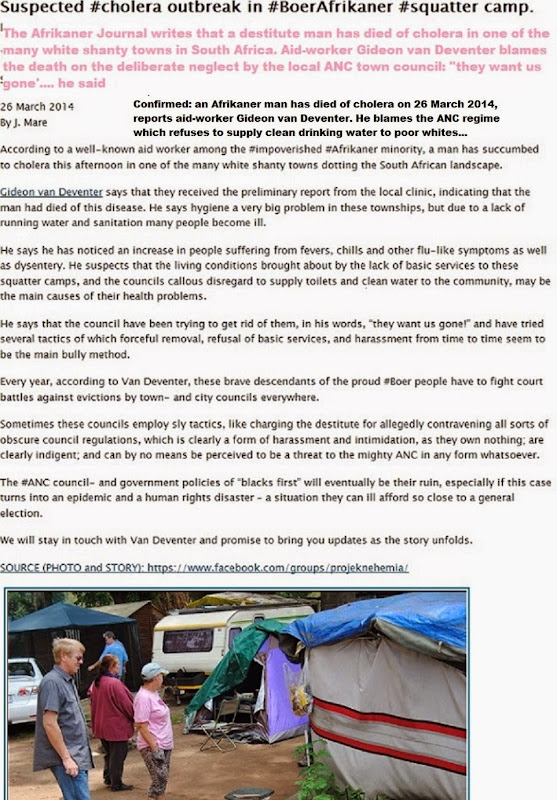 Thousands of Afrikaner children’s lives are also endangered each day by the increasingly desperate conditions in ‘white’ squatter camps.  It is estimated that at least 1million of the 3,4 million Afrikaners in South Africa – refused access to the job market by more than 100 anti-white ANC-laws – now have no homes, nor any source of income and are forced to live in derelict sites. Often these families only get one meal a week or even less. Recently a muslim charity was alerted to the widespread hunger among Afrikaner miners in Rustenburg, and rushed to their aid.