True Israel Under Christ the King of kings and Lord of lords!
Admin
Uncategorized
4 Comments
Spread the love

Secession? Texas is Already a Sovereign Independent National Republic, no need for Texas to seceed, because they never truly ceded.

The Christ’s Assembly at Texas

All worldwide Embassies of the Sovereign Republic of Texas should be immediately reopened!

Republic of Texas under renewed boundaries of her 2003 renewed Declaration of Independence. 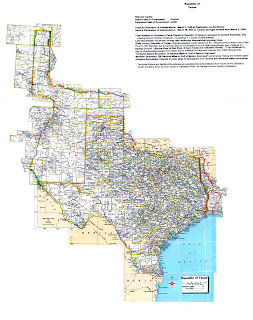 In 1836 Texas Declared her National Independence, and has ever since remained unchallenged, and only affirmed by numerous nations. Texas proceeded to make numerous international treaties, and open embassies worldwide. Her National Sovereignty on multiple occasions was also confirmed by Mexico.

The Republic of Texas never ceded anything within it´s boundaries. No law was ever devised for such nor enacted, nor was any treaty made with Sovereign Texas. Only an intent/resolving to annex Texas was declared in Congress, without Texas´ consent. Such annexation was never followed up upon, nor occured, not by any document neither was any legal action devised to carry out an annexation of the Rebublic in any way. No one can produce any piece of material the shows the resolution actually was acted upon by anyone by any law, other than through force, fraud and deception. more info at http://www.docstoc.com/docs/52162839/Annexation-of-Texas

Once a theft has been discovered, whether consented to by force, fraud or deception, the victim is obliged to make the thief accountable to law.

As from https://www.tsl.state.tx.us/exhibits/annexation/part5/question8.html
The National Republic of Texas relinquished only 67 million acres of their 225 million acres for a “cash payment”, that never was recieved. This makes all earlier boundaries of Texas, stretching all the way up into Wyoming, as still in force.
Yes, all 158 Million acres within Texas were never even part of the “purchase”, but remained 100% part of the Republic of Texas. The never ceeded territory within Texas would be today´s normal boundaries we see on any map. The mere 67 million ceded acres, which the Feds FAILED on payment, is considered what stretches up to Wyoming, through Colorado, etc.

While the President of Mexico already signed the international treaty of Velsaco declaring the National Sovereignty of Texas, Mexico recognized Texas independence yet again. Again in 1845 Mexico declared together with England, France, the Netherlands, and other countries formally recognizing the National Sovereignty of Texas. So even the close and hostile nation of Mexico specifically recognized the independence of the Republic of Texas with the promises from Texas they would not cede to the Union. Texas kept her word.

Only one fraudulent oral declaration was made by the governor during wartime against Mexico, being heavily paid for such statements by the US, and so he stated that Texas is now joining the Union. Yet he never acted upon it. At best this could only be considered a joint military coalition in law. No legal action ever took place to make an actual lawful ceding of sovereignty to the United States. While all US states retain a 10th Amendment limited sovereignty, Texas retains national sovereignty on top of that. Some say there was a US Congressional “joint resolution” to cede Texas, with no Texas representation. However, without any enactment clauses or treaties to go with it, such resolution only stands as what it is, “intent only”. Even with a resolution, no one ever followed up on that resolving of intention to cede or annex Texas, no, not in any way, shape or form.

Even during the civil war, Abraham Lincoln would not invade Texas because of her lawful sovereignty status.

President Houston accepted secession but asserted that the Convention had no power to link the state with the new Southern Confederacy. He stated that Texas was an independent Republic and should stay neutral. Houston took his seat on March 16, the date state officials were scheduled to take an oath of allegiance to the Confederacy. He remained silent as his name was called out three times and, after failing to respond, the office of governor was declared vacant and Houston was unlawfully deposed from office.

With the age of the internet this fraud was easily uncovered and made available for all.Texans to be informed. Immediately upon such disclosures the Citizens of Texas had resumed the original government. An interim President was elected in 1996 with a quickly drafted `Declaration of Independence` as resuming the National Sovereignty of Texas for all the world to see http://www.nationoftexas.com/articles/texdecl1996.shtml. Millions of Texans now becoming aware of the deception joined their independence movement. Thus culminating in a 2003 enacted Declaration of Independence by the interim government. However, shortly after minting the restored Texas currency in 2004, the central Government buildings were destroyed in an unsolved arson crime. The independence movement has been crippled ever since, struggling to regain footing.

More information at www.texasrepublic.info and www.nationoftexas.com Consider joining with likeminded or others aware of the lawful Soverign Republic of Texas. The Christ´s Assembly at Texas www.ChristsAssembly.com may be a good place to start, under our King Jesus Christ, and His lawful governance on earth, as it is in heaven.

1838 Boundary Markings Treaty with the UNITED STATES OF AMERICA

1839 Treaty with the Kingdom of France

1840 Proclamation with the Majesty the King of the French

1842 Treaties with England and Irelend

1844 Treaty with the Indian Tribes