True Israel Under Christ the King of kings and Lord of lords!
Admin
Uncategorized
4 Comments
Spread the love

Viruses cannot be vaccinated against. There are no anti-biotics for viruses, those are for bacterias. The only thing you can do is clean, wash yourself, and watch that those in your environment are also clean, and to separate yourself from those who refuse to clean their keyboards etc. Sound strange? We’ll quote you from the CDC and HPA so you can learn it’s the minimum required to stop from being reinfected potentially hundreds of times.

In light of the newly released WHO global health threat warning of the New SARS virus, we think it’s prudent to follow protocols for any virus. Lately the Norovirus has had the most publicity, taking down Hillary Clinton and killing others who have been reinfected hundreds of times. So we’ll quote from the norovirus threats in the hopes you formulate a good and balanced prevention strategy for all viruses.

According to statistics from the Health Protection Agency (HPA) the norovirus caused 1,500 hospital ward closures during the 2011/2012 norovirus season. Figures from the HPA indicate that the current vomiting bug season will cause more hospital ward closures than last year’s season. 356 viral outbreaks were reported in hospitals in October and November alone, which indicates a 140% increase when compared to the same period last year.

As people don’t develop immunity to the norovirus, there is the added danger that people can fall into a vicious cycle and repeatedly reinfect themselves from the contaminated computer keyboards. Bombarding the body sometimes more than 100 times a day, finally the body relents, breaks down and produces even worse symptoms.

National Geographic: Norovirus can survive freezing and heating and cleaning with many chemical disinfectants. In 2010, scientists surveyed a hospital for noroviruses and found 21 different types sitting on a single countertop. It takes fewer than twenty noroviruses slipping into a person’s mouth to start a new infection.

Dr. Sanjay Gupta on CNN says new form of Norovirus, CDC says it was a reinfection from Norovirus that dehabilitated Hillary Clinton, and that the only thing you can do is act like you’re always contageous, throroughly wash surfaces etc, etc.

The CDC says is spreads quickly to everyone within a crowded room, and only cleaning surfaces is the way to prevent the spread:

Norovirus can spread quickly from person to person in crowded, closed places like long-term care facilities, daycare centers, schools, hotels, and cruise ships. Noroviruses can also be a major cause of gastroenteritis in restaurants and catered-meal settings if contaminated food is served.

The viruses are found in the vomit and stool of infected people. You can get it by

People with norovirus illness are contagious from the moment they begin feeling sick until at least 3 days after they recover. But, some people may be contagious for even longer.

Norovirus: No Vaccine and No Treatment

There is no vaccine to prevent norovirus infection. Also, there is no drug to treat people who get sick from the virus. Antibiotics will not help if you have norovirus illness. This is because antibiotics fight against bacteria, not viruses. The best way to reduce your chance of getting norovirus is by following some simple tips.

Stop the Spread of Norovirus 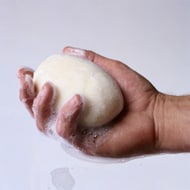 Take care in the kitchen

Carefully wash fruits and vegetables, and cook oysters and other shellfish thoroughly before eating them.

Do not prepare food while infected

People with norovirus illness should not prepare food for others while they have symptoms and for 3 days after they recover from their illness. (see For Food Handlers: Norovirus and Working with Food)

After throwing up or having diarrhea, immediately clean and disinfect contaminated surfaces by using a bleach-based household cleaner as directed on the product label. If no such cleaning product is available, you can use a solution made with 5 tablespoons to 1.5 cups of household bleach per 1 gallon of water.

Immediately remove and wash clothing or linens that may be contaminated with vomit or stool. Handle soiled items carefully—without agitating them—to avoid spreading virus. If available, wear rubber or disposable gloves while handling soiled clothing or linens and wash your hands after handling. The items should be washed with detergent at the maximum available cycle length and then machine dried.