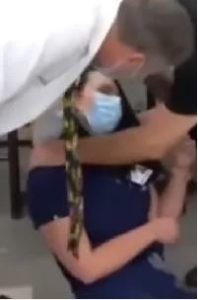 Only Jesus Saves! Proof as the COVID Vaccine “Poster Lady” Collapses, Sins of Babylon Multiply the Plagues of the world.

(Members and students only content. Priory of Salem, Institute of Health)

Good News of the Kingdom under Christ

Our people have long understood and agreed that only repentance to God’s laws (mostly Nationalistic laws) and the grace through the blood of Jesus Christ will save us. Our forefathers have always understood the Bible is a political book for us to receive our instruction and guidance for how to live our lives. However, in this latest generation we’re not seeing the church doing it’s duty. Rather than being that “salt”, a cleansing and preserving salt for the cursed and dying world to have His grace enter, we see a doubling down on increasing sins and diseases. The word of God said we would all be one body in Him (but cannot be one flesh with whores etc), and that we would be a light that is destructive to all sins and diseases, a city set on a hill, a (separate) Holy Nation, a Royal Priesthood, etc. He said that we all should continue to hold the lines (occupy till I come) and to preserve the freedom to keep God’s absolutist nationalistic laws in peace.

Lately we’ve seen a new ideology dominating not only in the country, but in parts of the church. Rather than trusting Jesus Christ as their Lord of their life, we have seen new idols and new types of gods (corruption being one) to take the dominion. Rather than praying His Kingdom come and be done ON EARTH, we’re seeing a “great falling away” as was foretold. Yet He has promised we will be saved through the tribulations, and through the trials we will make it, as is reiterated in dozens of places in the prophetic and unshakable word of God. There is nothing new under the sun. These days, yet again, as in past civilizations, the people have are duped to think that rather than repenting, they can do more evils and spread more uncleanness and somehow it will work out. While God’s law says Separate, Quarantine and BE CLEAN, some think we can inject poisons into the population and some good result will come. They’ve forgotten that every good thing comes from God and this comes through His Son Jesus the Christ. The rest of the non-Christian world then comes to the Christian nations (seed of Abraham) to get those blessings. Now they are running to more filthiness, it is so laughable that the unGodly are so duped as to think putting unsanitary cloth masks on their faces will reduce disease! Rather than turning around from the filthiness, and trusting God, people think a new untested vaccine can save them.

We’ve all heard quoted “the gates of hell will not prevail against the Saints” however, it’s better worded “the Church prevails over the gates of the hell”. Yes Christ told us all to be Ambassadors and Apostles to teach “nations” to keep His nationalistic laws “obeying whatsoever I commanded you” (as the last and great commission given by Christ to His Apostles, and said “lo I’m with you always, even till the end of the age”). He said that after prefacing His position as Christ Himself being the one Eternal God, as He told His Apostles. He often said “I give you no new commandment”, yet some still are fooled into thinking this must be referring to new laws. In that context of being the Eternal God, He confirmed to His Apostles and commanded them saying, “teach national governments to fall in line, obeying EVERYTHING that’s been commanded by God”(Matt 2:20). These weren’t some new laws, but the same laws of God, of the same God who said “I changeth not”. He is the same yesterday, today and for ever. If anything Christ indicated the laws would be magnified, and those same laws written on our hearts, so that not only we don’t commit adultery, but even desire to do it in the heart. As He said if you did then you’re guilty of the latter. However, this also will include the many quarantine laws found in the Bible, for cleansing sin. We now also have His precious blood which is of the new order of the Melchizedek Royal Priesthood, which guides us in the benefits of what David called “God’s wonderful law of liberty / nationalist laws” so that we are not ensnared in the bondage of flesh sins which want to just do what ever feels good. Christ said we all must daily deny our flesh, take up our Cross and follow Him.

God told us all “Come out of Babylon that ye partake not of her sins or of her plagues”(Rev 18:4). For all time it has been understood that stopping sins, and increasing purity have cleansed disease, our populations have forgotten these foundations. As sins are reaching up to the heavens, lately only the fanatics the fanatics for the most extreme evils are trusted as America’s salvation. That’s not what God said. If you’re going to be in His Kingdom, which we daily pray is “come on earth” then we’ll ensure we remain with Christ as our true Lord, who is Lord of lords and King of kings. The Babylon jurisdiction will need to be disregarded as it’s falling. The correct perspective in our time is “Babylon is Falling“, and that is a jurisdiction where Christ is not King of the kings. We only exist as His Saints on earth if we are operating as His holy/separate nation, “His Royal Priesthood”. If we are prevented from keeping God’s quarantine laws in peace, then we cease to be in His kingdom. As He said “unless your righteousness/law keeping be greater than the Scribes and Pharisees ye shall in no cases enter His Kingdom” jurisdictions on earth (Matt 5:20), the Spirit of the law being most important, the letter may cause misunderstandings, teaching is not in the legalistic lettering but in the power of the word of God being demonstrated in what it really means to humanity.

We all saw the American Nurse “COVID Poster Lady” Collapsing at the time of her moment promoting Big Pharma, promoting their vaccine. She may well represent America and the example in trusting in unclean abominations (such as untested vaccines that hijack the DNA). All the faith, hope, trust and situation in Babylon, rather than God’s law, will continue to have this result.

They say it’s just coincidental that it’s the VERY FIRST NURSE TEAM to get the covid vaccine, and she’s the lead nurse spokeswoman. I watched several doctors responses to the cameras in the minutes afterwards and they’re very strong that it has absolutely nothing to do with the vaccine, and they do sound believable to those who are easily deceived. They asked her to get back on camera and she said yes she’s totally fine etc etc, and argued that she faints any time she sees blood , or when she got a hangnail. She says the pain is almost zero in her arm, but she has fainted a lot lately.

As we saw in the video, THE FIRST NURSE TEAM TO RECEIVE THE COVID VACCINE gets totally dizzy and faints 17 minutes after getting the jab.

UPDATE: She says she works in the COVID unit, and has fainted 6 times in the last 2 weeks….
BigTECH in various platforms, (whether google,facebook,twitter, or youtube is blocking anyone who wants to link the incident to the vaccine, that is although there have been dozens of other widely reported hospitalizations as covid vaccine reactions. One in Alaska became more high profile as reported in the New York times, and two in the UK.

Lets not fall like that lady collapsing, who was the COVID poster lady nurse, getting the first covid untested vaccine. Lets be Godly and be ye separate. Thank God for His wonderful laws of quarantine. Covid distancing is not that bad: Social Distancing is an Elite Privilege of Imperial Nobility and of Hebrew law. Learn about the 110 Identification Marks of the True Israel of God. Learn that God’s laws are exclusive to true Israelites, and the rest of the nations are unable to understand God’s laws.

We all need to do as Christ said “seek ye first the Kingdom of God and His righteousness, then all these things(necessities of life) will be added unto you.” (Matt 6:33) We pray for places we may keep the commandments of God in peace, including the forgotten commandments of cleanliness, holiness and godliness. Including the commands to have neighbors of like-mind and faith, banding together in our “freedom of assembly” and “freedom of association” with the basis of our creed and faith as has always been part of our establishment of religion, although recently is an aspect of our faith that is heavily attacked. He is Lord over His lords and King over His kings, who are under Him rather than under Babylon.

The conclusions remain as always that ONLY Christ Jesus and His precious blood can save us. Good things only come from God, and returning back to Him will bring healing. We can get forgiveness of sins through His blood, and also be in right standing with God through Christ’s perfect righteousness (where He kept the law perfectly. When we recieved Christ that wasn’t the end of it, but just part of the birthing beginning. We’re to grow up in Christ, after growing on the milk of His word for a while, finally to get the strong meat etc, and even walk as He walked (Col 2:6, and 1John 2:6) and not remaining in the bondage of uncleanness of sin, and uncleanness of not being separate from sinners and the plagues which come from the sins of babylon.

WIFI WARNINGS For Women and Children! Simple Solution! (WIFI is a sin, how God can help)

Announcing the best 5g shields on the market. http://nature-in-harmony.com/ we also have more economical solutions. Here’s a 10% off coupon you can use for anything in the store. I recommend getting the 5g protection card, you can now buy two get one free! COUPON CODE: BRUNSWICKFIELDS

There are many articles about the covid destroying the blood just like the 5g does. Here are a few articles:

https://ifurinstitut.wordpress.com/2020/04/24/part-2-of-corona-covid-19-symptoms-caused-by-60-ghz-frequencies/
We still also need to do normal measures, such as “the Forgotten Washing Commandment, for all Redeemed Gentiles!“
← Previous Post
Next Post →