St. Andrew's and St. Joseph's O.C.C.. Home of Watchman News, the Priory of Salem and TCAWW

How the Orthodox English Liturgy (the Book of Common Prayer) has come to us.

We keep the Book of Common Prayer as a central part of our liturgy together with the *TRUE Hebrew feast services as handed down within the Orthodox Church of the Culdees. These festivals are lightly highlighted in the mainstream version. The Foreward in the 1928 BCP indicates that depending on the availability of ministers, as much festivals as can be added, should be. This article gives you a little history on where the Book of Common Prayer came from.

The Book of Common prayer is to be used not only by priests, but even moreso for daily usage in the homes and schools.

Yale, Princeton, Kings College, Union, Rutgers, and many other prestigious American Universities, required all students and faculty to attend the morning and evening services as defined in the our Orthodox English Liturgy (or Book of Common Prayer). Overall these rules of the universities were upheld formally for about the first two centuries of their existence. By the time of the hippy age of the 1960’s most of these had fallen by the wayside. This liturgy that built American spirituality and intellect is called the English Liturgy, or Book of Common Prayer.

Evidence abounds everywhere that this liturgy was never restricted to Anglican or Roman Catholics. It was used by the most separatist Congregationalists as the Orthodox way. It also was kept in the most separatist Calvinist denominations. We even find the canonicity of the liturgy could not even be denied by the Orthodox Russian church, as Bishop Tikon of Moscow and the Synod of 1904-1907 recognized it. The Russian Eastern Orthodox recognize it as rooted in the Sarum Liturgy.

The “Congregationalist Church” has held this rite from 1645 till this present day (lately under the “Congregational Federation” which has tried to re-establish the more Orthodox version of the denomination). Several of the main Universities in America were founded as Bible Congregationalist Bible Colleges with the liturgy mandatory for all students. This order of Worship is conclusively shown to be the most American and Christian way. For detailed information on such usage, get the book “Freedom or Order?, The Eucharistic Liturgy in English Congregationalism 1645-1980”

Below is a diagram of the overall succession of our prayer book from “Everyman’s History of the Prayer Book” written in 1912. 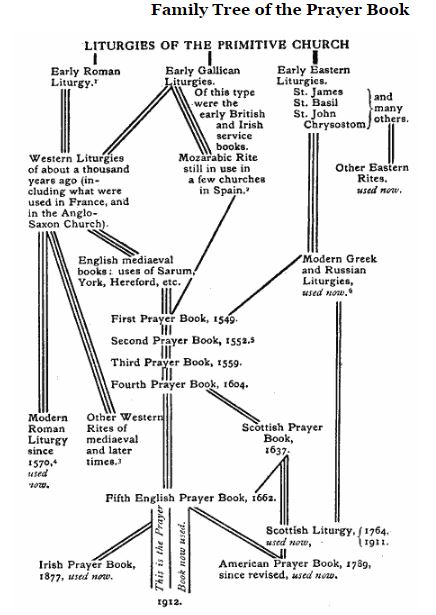 NOTES ON THE FAMILY TREE OF THE PRAYER BOOK

1. — The Roman liturgy in the form in which we know it at present is unlike the other great liturgies of the Church, and stands very much by itself: the Canon seems to be in a state of dislocation. The earliest Christians in Italy may have used a Greek rite which is now lost.
2. — In varying degrees some other modern rites — the Ambrosian or Milanese, used in the north of Italy by over a million people, and the Mozarabic rite which still survives in certain Spanish churches — partake more or less of Gallican character, though with more or less Roman intermixture.
3. — Although Mediaeval non-Roman Western services belonged to the Roman family of liturgies, the ceremonies used with them, and the way they were carried out were as a rule Gallican (French, Spanish, English, etc.) and not Roman.
4. — Besides the Rites of Milan, etc., mentioned above, there are other Christians of the Roman obedience who do not use the Roman missal, viz., those of the older religious orders, Carthusian, Cistercian, Dominican, etc.
5. — The old Latin books of Sarum use were restored for a few years under Queen Mary, 1553-1558.
6. — These Orthodox Eastern liturgies are translated into many languages, and used all over Eastern Christendom: they seem in many respects more primitive in character than the Western rites.
7.—It will be seen from this table that the modern Scottish liturgy is more immediately connected with those of primitive times than any other Anglican service.

This diagram shows very roughly the origin and relationship of the Prayer Book services and of other service books used elsewhere. The thicker lines show a very close connection or immediate descent, the thinner lines a less close connection, or the descent of a part only.

To read the book in full, order a copy from amazon:

The whole Western Rite Orthodox community understands that the English Liturgy (1549 Book of Common Prayer) was widely considered a Canonical Orthodox Liturgy. Before the Bolshevik revolution the Holy Synod of Russia in 1907 agreed to it, with some small considerations in the structure.

These Brotherly advices were considered adapted by the 1928 version of the Book of Common Prayer.

This liturgy has been augmented with material from the Sarum Missal, Gothic Missal, York rite, and 1718 Scottish Non-Juror liturgy. An epiclesis from the Gothic Missal is included.

Note: The non-Juror Bishops had concrete recognitions of the British church acknowledged across the Patriarchates, under protection of Tsar Peter the Great. These had all agreed on the antiquity and superiority of the Orthodox church of Britain(Culdees) in the West. Most consider Britain to have remained directly subordinate to the Jerusalem Patriarchate, but with some independence. While others considered the Glastonbury See of Britain to be always an independent lead of the church across the world, especially in its thriving church regions which Rome could not penetrate. Several at least consider the much larger Cathedral(Abbey) of Glastonbury to have been equal to Constantinople, as for it’s popularity it was called the second Rome, among other high recognitions the world over. The Glastonbury Tor was called a pyramid and the Monks there were called Egyptian by those authoring the stories of St Patrick and Patrick’s Irish (Culdean Primates from Armagh) successors who at their climax had the tradition to leave Ireland to lead the Monks at Glastonbury. Ireland being another one of the harder Jurisdictions to penetrate, and being one of many safe havens for our English and Scottish Orthodox. Still all were agreed that the Orthodox English are successors of the First Century Orthodox Church of the Celts (Culdees), as planted by Christ’s Uncle St Joseph of Arimathea and by Aristobulus(assistant of the Holy Apostle St Andrew). In our church we have also the traditions and historical records demonstrating these were accompanied by other Apostles of Jesus Christ and numerous First Century Saints.

Help us gain visibility by linking to us on popular websites like: