True Israel Under Christ the King of kings and Lord of lords!
Admin
About, Beliefs, Celtic Church Roots, Christian Israel: Tribal & Theological, Ecclesiastical, Legitimist Philosophy, Literature, New Believers, OCC Assemblies, Order Establishments, Perpetual Confederation (for Christ), Priory of Salem, Templar, Theology Institute
1 Comment
Spread the love
The subject of Celtic Church itself is a vast area of interest around the world. Tens of thousands of inspiring articles and pages circulate on the internet just as it relates to the Celtic Church. Many of these are on our website www.st-andrewsocc.org The earliest Christian priests of the Celtic lands are called Culdees. So the Culdees would be in the hidden core of the “Celtic” intrigue felt around the world.
Although the protections of our church were more wide ranging in ancient times, still we have sovereign protections (through various means) continuing today for our Orthodox Celtic ethnic minority communities. While our identity and culture is strongly attacked, God has provided us ways forward.
The rank of our church (for example at Glastonbury) has remained comparable to Constantinople (or higher) for the true Orthodox world. Long before the Great Schism our Abbots and Bishops would freely consecrate, co-consecrate and receive consecrations from other jurisdictions such as the Patriarchates of Jerusalem and Constantinople (as one church). Till the last few centuries, the Black Friar communities of Armagh Ireland (Hereditary Coarbs), as protected by the O’Neills, were an example of the continuity of Culdee independence. Today’s thriving order of Benedictine monks (which merged with Culdees long ago) are another example of how an order who existed before the great schism, continues today as being wholly Orthodox in the West. Culdees typically hold more orthodox compliancy credentials than typical orthodox.
Our unbroken succession of priests (within numerous orders) as Culdee priests, continue in unbroken traditions of the Celtic First Century church, as affirmed in official celebrations of our Celtic Saints around the world. Iona Scotland and Glastonbury England, as well as the numerous institutes listed in the Welsh Pedigrees of Saints, are other examples of our continuity from the original Israelite Apostles. The most inspiring official documentaries on lives of the Celtic Saints, demonstrate the enduring nature and strength of our Independent Celtic church of the Culdees that permeated in every age and is within our BCP liturgy and practices today.
All of England celebrates King Arthur’s burial place at the Culdees’ Glastonbury Abbey. We also celebrate Emperor Constantine’s Maternal Grandfather King Cole buried at Glastonbury. These had founded a long line of our Celtic Kings who continued to defend our church independence, as unto this present day. Several Irish Coarbs of Armagh (the Primates of the Irish church) would hand it off to one of their family heirs, and leave Ireland to finish their ministries as Abbots of the Glastonbury Abbey. Finally the Saxon Kings were some of the greatest protectors of Glastonbury Abbey where it remained in greater size (and arguably more visited and in more grandeur than) Constantinople’s Cathedral. It remained regarded as such by the West at least until it’s destruction by King Henry VIII, and the successors built a new Glastonbury in America at the height of American Christian governance.

There are many well known leaders of our early schools, such as Saint Patrick and Saint Columba, and even Christ’s Uncle Joseph of Arimathea, and other first Century Saints who led Britain, like St. Aristobulus, St. Andrew, St. Paul, and St. Philip [some of the most ancient forefathers of the Celtic Orthodox Church]. We have a list of 200 more Celtic British Saints who led the church centuries before the Roman Saxon St. Augustine came to England.

It was recorded before Augustine came, St Columba had Saxons in his school at Iona, namely Genereus and Pilu as recorded by Adamnan. The Culdees weren’t exclusive to themselves, but had set up great missions to Europe(ie Luxeuil and St Gall and 83 other major establishments). The Roman historian Bede  had also praised the Celts’ outreach and integration of their neighboring kindred tribes.

Our Culdean Saint Cummian, who lived a few years after Columbanus, wrote: “What can be deemed worse of a Mother Church than that we should say: Rome goes astray, Jerusalem goes astray, Antioch goes astray, only the Irish and Britons know what is right.” (Cummian, Ad Segienum, Huensen Abbatem.)

On the Continent numerous of our Early Culdean Saints are honored:

150 early Culdee Missionaries are honored in Germany, 45 in France, 30 in Belgium, 13 in Italy, 8 in in Norway and Iceland, to say nothing of other places and Saints of whom mention is made in the British Martyrology.
In the early period of the church, the Culdees are renown for having already founded 12 monasteries in England, 13 in Scotland, 7 in France, 16 in Bavaria, 15 in Rhoetia, Germany and Switzerland, 10 in Alsace, 7 in Lorraine, 12 in Armorica and 6 in Italy. 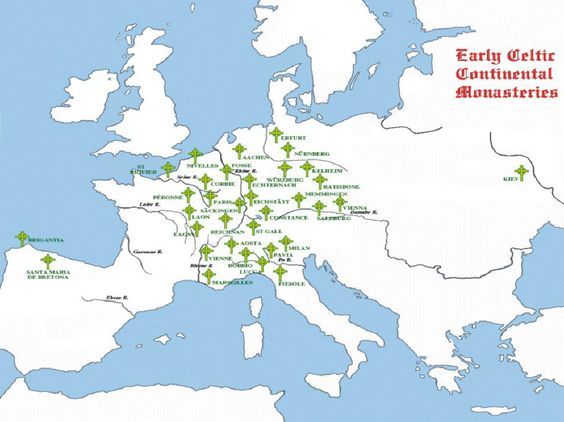 This church and the many Saints have brought us all much encouragement and inspiration in Christ. Most of all we see what a wonderful God we serve, that our God, the God of Israel, is a true and living God who honors His covenants with His bride called Christian Israel.

Read more about the short history of the Celtic Culdean Church and our reestablishment.

In the following section you will learn more about the fundamental aspects of the Celtic Church.

It was actually from the time of Jeremiah the Prophet that the Irish Celtic church began to take hold. His dated grave remains part of the history of Ireland today. He had successfully transplanted the Kingdom of Israel to the British Isles, just as God had foretold to him. David’s literal throne is a part of Irish, Scottish and English history that is known as the stone of scone. The many Hebrew practices remaining so long in the Celtic lands bears witness to this Israelite heritage. – His Eminence ++ Rev Dr. Stephen M.K. Brunswick ThD, PhD, Primace, OCC.

Here is a short selection from the Doctrinal Articles of our Culdean (Hebrew Celtic) Church:

A book we highly recommend is “The Celtic Church in Britain” by Leslie Hardinge.

It covers a plethora of proof that the Celtic church kept the Dietary Laws, the Feasts, and Sabbaths.

The Celtic Church was Hebrew and Orthodox

The Celtic Church which occupied Ireland, Scotland, and Britain, had the Syriac (Byzantine) scriptures instead of the Latin vulgate of Rome. The Celtic Church, with the Waldenses and the Eastern empire, kept the seventh-day Sabbath.
The hundreds of pre-schism Orthodox Saints of Great Britain bear the strongest testimony of these facts. Today the Eastern churches still venerate most of these. For Britain alone we have cataloged 130 official Saints of England who pre-dated Augustine. An example of the most popular pre-schism Orthodox Saints of England can be found online on such sites as: http://www.oodegr.co/english/istorika/britain/British_Saints.htm.
Our list of the 130 English Saints before Augustine can be found at: http://glastonburyculdee.org/130%20british%20Saints%20before%20augustine.pdf

Not only was the Celtic church using a Syriac Byzantine Bible, but they were more successful in guarding the whole law of YAHWEH.
One example of the Hebrew Celtic Law is the Lieber ex Lege Moisi.
The Liber ex Lege Moisi, was distributed by Saint Patrick and his successors at every Celtic church, whether in England, Scotland or Ireland.
Summary of contents:
1.       The seventh day Sabbath.
2.       Slavery and the relationship of master to servants
3.       Various capital offences.
4.       Compensation in money of “kind” for different crimes.
5.       Animals’ offences against person and property.
6.       Animals used as food, clean and unclean, and slaughtering.
7.       Sex and marriage.
8.       Feminine hygiene.
9.       Tithes, first-fruits, vows, and offerings of all kinds.
10.   Justice, bribery, witnesses, traduction, and usury.
11.   Cities of refuge, asylum, and hospitality.
12.   Wizards and necromancy and human sacrifices.
13.   Inheritance, and the Sabbatical and Jubilees years, debts.
14.   Sights of a true prophet.
15.   Cursing and blessing.
This formed the basis of beliefs by the Celtic Christians.
The regulations of Adamnan, accepted that people could eat the unclean swine, but not if it was too fat. The pigs must be lean.
The dietary habits of Columba were clearly described as abstaining from meat and ale. (see “Old-Irish Life of Columba”, or “Amhra Chulimb Chille”.)

We are the ancient British Orthodox and Celtic church of God. We are Anglican Orthodox, as under bishops in canonical succession within our communion. If you’d like to learn more about our Anglo Celtic faith, write to marshalofsalem@yahoo.com

For simplicity we call ourselves the Culdees’ Church, or Orthodox Church of the Culdees. Consider joining us.

Isa 58:12 “And they that shall be of thee shall build the old waste places: thou shalt raise up the foundations of many generations; and thou shalt be called, The repairer of the breach, The restorer of paths to dwell in.“